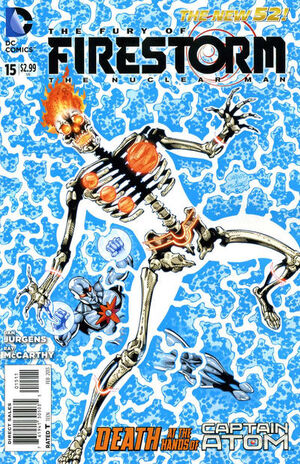 It is said that real power is embodied by the ability to move mountains. That once you can do that, nothing will be denied you.

Jason wakes up in the Firestorm Matrix, surprised to see darkness and Ronnie, instead of his usual view of the world through Firestorm's eyes. The two conclude that someone else must be in charge, but they don't know who.

Dr. Megala, drunk with power, decides that Qurac needs to be taken down a notch and turns some of their missiles into Rubik's Cubes. Captain Atom briefly visits the Continuum, and then, knowing what needs to be done, engages Firestorm. Exerting tremendous power, Dr. Megala believes that he destroyed Captain Atom. However, Captain Atom actually dis-integrated his body, re-integrated behind Firestorm, and delivers a final blow which starts to fragment Megala's barrier on the Firestorm Matrix and creates a tsunami. Ronnie and Jason take this opportunity to try to regain control of "their" body, and begin speaking to Megala. Jason theorizes that Megala must have his own body somewhere, and that perhaps they can force his consciousness back.

Megala requests help, and the continuum dispatches the Dataxen 'droid. Megala, back in the air, launches a counter offensive, but it doesn't phase Captain Atom. Captain Atom tells Megala that no single person should have the power to level a city, and that is why he himself left for the moon. A few final blasts from Captain Atom, combined with mental pushes from Ronnie and Jason final result in Megala losing complete control, and he finds himself in the Firestorm Matrix, where Ronnie socks him in the face. Ronnie takes over Firestorm's body. Realizing they cannot beat Captain Atom, Ronnie tries to explain that they are just kids trying to help the world and not Megala anymore. Unfortunately, Captain Atom says it's too late, a massive amount of energy has already been released/absorbed, and the Quantum Field rips into the Time Stream. Captain Atom, or a piece of him, is shot through time into the 31st Century and is gone without a trace (in our time). Ronnie has lost consciousness from the battle and falls into the Pacific Ocean.

Retrieved from "https://heykidscomics.fandom.com/wiki/Fury_of_Firestorm_Vol_1_15?oldid=1427228"
Community content is available under CC-BY-SA unless otherwise noted.