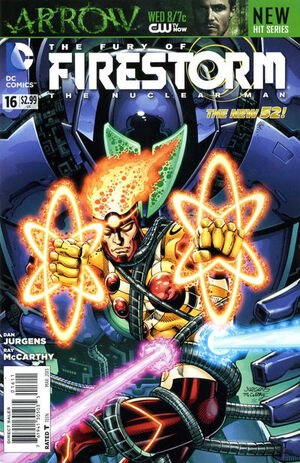 Who made you boss?

Jason Rusch wakes up Firestorm (Ronnie) in the Pacific Ocean and he quickly surfaces. They think that they killed Captain Atom, and the Continuum cannot find a trace of him either. Ronnie's in a panic though - he needs to get home before the big Homecoming Game! At the Homecoming Game, Jason spies Dataxen flying overhead and decides that something needs to be done. With Ronnie Quarterbacking a close game, Jason decides to get creative. Ronnie throws the winning pass just as time runs out and, at the same time, Jason cuts the stadium lights so no one can see their transformation into Firestorm.

Jason convinces Ronnie that the best plan is to allow Dataxen to capture Firestorm so that they can take out the guys controlling him. Dataxen lands at his base and Firestorm breaks free and starts to fight. Firestorm changes the molecular structure of the concrete of the building and it starts to collapse. The Continuum starts to evacuate! Doctor Megala, who has been out ever since he was a part of the Firestorm Matrix, wakes up just in time but he can't remember anything. Jason realizes that the facility's power core is about to explodes, so they stop fighting and instead rescue their tormentors.

Soon after, General Eiling and the Army show up to arrest the Continuum crew. The General, of course, thinks that Firestorm is a menace. Elsewhere, the Teen Titans decide that it's time they look into the "track of destruction" known as Firestorm!

Retrieved from "https://heykidscomics.fandom.com/wiki/Fury_of_Firestorm_Vol_1_16?oldid=1427229"
Community content is available under CC-BY-SA unless otherwise noted.