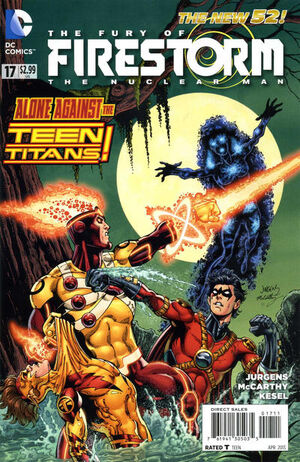 Jason and Ronnie take Firestorm out to South Dakota to try to change Mount Rushmore back to its original state.[1] A United States Army helicopter starts to open fire on Firestorm. Jason suggests that they run, but Ronnie, feeling he's done nothing wrong, decides instead to hop in the cockpit and have a chat. He explains that he hasn't done anything wrong, that it was other people that look like him, and asks that the U.S. Army leaves him alone so he can fix the damage that the other Firestorms have done.

Meanwhile, the Teen Titans catch a newscast of Firestorm's deeds on television. Red Robin suspects that Firestorm is a teenager and fears that N.O.W.H.E.R.E. will be targeting him. They decide that they need to find him first.

Back at home, Ronnie and Jason meet up with Tonya Lu. She informs Ronnie that his European History paper, which she wrote for him,[2] was entered into a competition by his teacher and it won. Ronnie seems to have very little problem with the complications of his cheating.

Ronnie has one last important thing to do. He heads to his school teacher and admits that he didn't write the paper he turned in. She respects his admission and asks him to write a new paper by Monday. Not getting kicked off the football team, he joyously runs home only to find that his house has been disrupted, his mother is missing, and a note has been written on the wall in blood: "She's mine now Firestorm."

Retrieved from "https://heykidscomics.fandom.com/wiki/Fury_of_Firestorm_Vol_1_17?oldid=1427230"
Community content is available under CC-BY-SA unless otherwise noted.