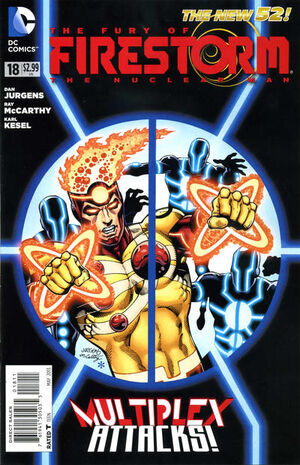 Are you kidding me? With the power I have, I'm going in there with guns blazing!

Relay and Skull Crusher enter a Q-Core research lab to steal the new Q-Phone prototype. Somehow, Firestorm has tracked them down and interrupts them, asking what they did with "that woman" (his mother) that they kidnapped.[1] However, the two crooks don't know anything about the kidnapping, so Jason and Ronnie take a moment to review recent events.

Meanwhile, Joanne Raymond is being held hostage in a small room within a warehouse. She's not alone though: a man named Rick is also being held hostage. The two manage to break out of the room and find that they are being guarded by several men in strange black suits - Multiplex! However, Multiplex is just a pawn in a much-more complex scheme plotted by a mysterious quartet. Joanne manages to get her cell phone and makes a call for help - Firestorm help!

Firestorm arrives at the warehouse with "guns blazing," although Jason suspects a trap. The find Joanne (and Rick) secured to a strange machine. Jason thinks that he's seen "Rick" before, but can't place him. Firestorm proceeds with trying to free the two, but as soon as starts blasting the machine, it starts pulling energy out of him. Jason then realizes that "Rick" is actually Professor Stein's ex-assistant - Dalton Black, aka Multiplex! Dalton confirms Jason accusations and reveals how he used Stein's work to turn himself into Multiplex and that he needs Firestorm for power! Well, Firestorm gives him power - he pours out as much as he can and overloads Multiplex. He quickly frees his mom and is glad the threat is over. However, the mysterious quartet behind this scheme are just ready to start!