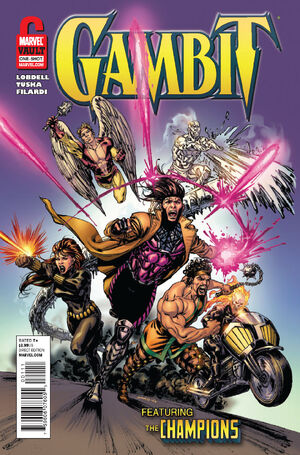 X-Man Gambit joins the Champions to take down the Mental Organism Designed Only For Killing! From those halcyon days gone by when the Champions were L.A.’s premier super-team comes this amazing assemblage featuring: Ghost Rider, the Black Widow, Angel, Remy LeBeau and the demi-god Hercules! The Champions are in a desperate race to stop the malevolent MODOK from coming into possession of the Scroll of Vishota. With such a parchment in your control, world domination is but moments away. Looks as if the ragin’ Cajun showed up just in time!

Retrieved from "https://heykidscomics.fandom.com/wiki/Gambit:_From_the_Marvel_Vault_Vol_1_1?oldid=1643988"
Community content is available under CC-BY-SA unless otherwise noted.