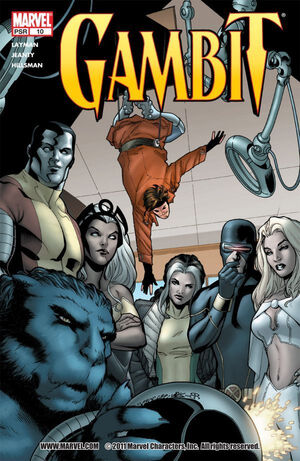 Appearing in "X, Lies and Videotape"Edit

"HATH NO FURY" PART 1 (of 3) As a thief, Gambit has faced some risky jobs, but this may be his most dangerous yet—he'll have to infiltrate the heavily-fortified home of the world's most powerful mutants. That's right…Gambit’s got to swipe something right from under the noses of his teammates, the X-Men! 32 PGS. /Marvel PSR …$2.99

Retrieved from "https://heykidscomics.fandom.com/wiki/Gambit_Vol_4_10?oldid=1650848"
Community content is available under CC-BY-SA unless otherwise noted.