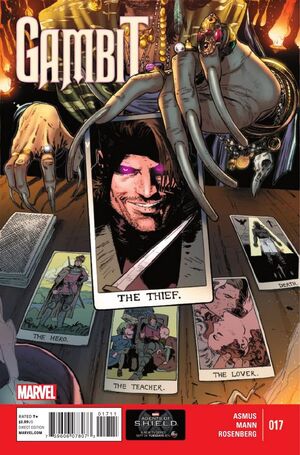 Torn between his separate lives - mutant hero and master thief - Gambit is forced to make a choice between the two, with major consequences for what comes next!

But he better make his choice fast - because he's trapped at the center of a deadly super-villain riot! (And a few of them may have scores to settle with Gambit himself.)

Retrieved from "https://heykidscomics.fandom.com/wiki/Gambit_Vol_5_17?oldid=1648392"
Community content is available under CC-BY-SA unless otherwise noted.