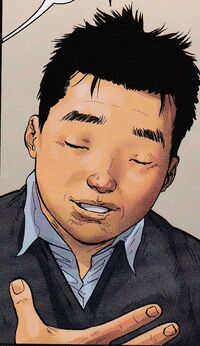 Dude, you are a mutant. That is entirely cool.

Ganke grew up in a prosperous family and was the best friend of Miles Morales. When his father was dying, Ganke and Miles went to the hospital, where they were asked to wait, but doctors could not save his life and now Ganke lives with his mother.

Studies in the academic school

Ganke was the best friend of Miles Morales and the only person who Miles had shared his secret with. It was Ganke who figured out that Miles carried similar abilities to Spider-Man. He was first alerted of his friend's newfound powers when Miles came bursting into his room and explaining the events that transpired to give him such abilities. Thrilled at Miles's "cool" powers and making the initial assessment that he was a mutant, Ganke made suggestions that he should be a superhero and embrace his abilities; though Miles was much more reluctant to use his powers and wanted to ignore them in pursuit of a normal life. He later made the correct deduction that Miles's abilities were not a product of mutant DNA, but as a result of tampered genetics.

Ganke served the purpose of covering for Miles as he later assumed his duties as the new Spider-Man and became his confidant. He received information about the obstacles Miles faced while he was Spider-Man, and tried to offer his input on how to deal with the situations he encountered. For instance, Ganke suggested that Miles battled his Uncle Aaron, the Prowler, instead of finding an alternate option; he believed that fighting him is the only way to put an end to the problem.

Divided We Fall, United We Stand

Ganke later suggested Miles to join up with the Ultimates, saying that they needed his assistance.[2]

During the occupation Ganke communicated with Miles through mobile phones, his unsuccessful landing due to the fact that he fled from the Internet. But the conversation Miles and Ganke interrupted the teacher. In the evening Ganke demonstrates Miles equipment for creation of web-shooters, Miles, " said the other, where he took the money, Ganke said that the maintenance of collector's edition Lego. Ganke suggested Miles to make their web formula, inherited from Peter Parker, saying that he did during the war. The next day, Ganke went into the apartment Miles, where he saw reporters. When father drove Miles reporters, one fell on Ganke, then reporters, and Ganke knocking at the door, Miles admits him into the apartment before the father Miles left the apartment.[3]

When Rio went for Jefferson Miles from Ganke they hear the sound, they look out the window and see that their father Miles and reporters have Venom. Ganke independent Miles starter web, before the automatic utility in invisible form, crawling out from the window of her apartment. Ganke watched the fight Miles and Venom, during which the Venom mutilated Jefferson, and Miles Venom takes away from the family. Ganke went outside and tried to lead Rio, holding on hands of Jefferson, then you receive the Miles overcome the Venom. When father Miles taken away by ambulance, taking a Rio, Ganke calms Miles.[4]

Miles decides to go to the hospital, but Ganke explains that it is not helpful, reminding him about his father and decides that they need to find out about Venom. Then Miles and Ganke meet Gwen Stacy and Mary Jane Watson, who wants to talk all about Venom. Ganke with the guys come into the apartment Miles, where he learns from girls about the origin of Venom, and with a shock learns from Gwen, that she was killed by one of the Symbiote, then was his carrier. But their conversation interrupts detective Maria Hill, wants to know from guys about Venom, but they don't want to talk to her and she leaves.[5]

After Miles went out to battle with Venom, Ganke with Gwen and Mary Jane got to the hospital, where they saw that Rio had died at the hands of Miles. Inheriting morning Ganke in his house, standing outside the door, having heard that Miles no longer wishes to be Spider-Man.[6]

A year later Ganke slightly lost weight and also as Miles grew up. Once Ganke learned that Miles received a message from Spider-Woman, which appointed him to the meeting.[7]

Retrieved from "https://heykidscomics.fandom.com/wiki/Ganke_Lee_(Earth-1610)?oldid=1733281"
Community content is available under CC-BY-SA unless otherwise noted.