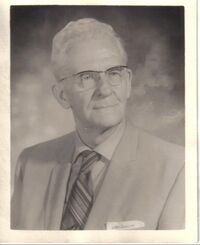 Gaylord McIlvaine Du Bois (as it appears on his baptism certificate), or DuBois (He signed it both ways: as two words, both capitalized; and as one word with a capital "B") (August 24, 1899 Winthrop, Massachusetts – October 20, 1993 Orange City, Florida) wrote well over 3000 comic book stories and comic strips as well as Big Little Books and juvenile adventure novels.

An avid outdoorsman, Du Bois had a real affinity for writing stories with natural settings. His forte was in Westerns, as well as jungle comics and animal reality comics. He created many original second features for Western Publishing (e.g., "Captain Venture: Beneath the Sea", "Leopard Girl", "Two Against the Jungle", etc.), but most of his work for the company was in writing stories with licensed characters. Perhaps most notably, Gaylord Du Bois wrote Tarzan for Dell Comics and Gold Key Comics from 1946 until 1971.

Among the various genres for which he wrote comic book scripts, most were of the outdoor adventure variety, particularly Westerns, including Red Ryder Comics (for which he wrote "Little Beaver" text pages, The Fighting Yanks WWII feature, and, particularly, the "Kyotee Kids" Western series, 31 scripts, the first being sent to his editor 12/23/1946, the last being sent 3/19/1949, that ran from about issue #43 ending with #72; Du Bois had previously been one of the ghostwriters for the Red Ryder newspaper comic strip drawn by Fred Harman. Before its format change to all-new Red Ryder material, Red Ryder Comics featured Red Ryder newspaper strip reprints.

He also wrote stories for Gene Autry Comics, Roy Rogers Comics (1944-1956, 1959-1960, all of the first run in the Four Color Comics series, and, under its own numbering, Roy Rogers Comics #1 through about #108, and approximately #134 through #143), Zane Grey's King of the Royal Mounted (Du Bois had previously been one of the ghost-writers for the King of the Royal Mounted newspaper comic strip drawn by illustrator Jim Gary), Sergeant Preston of the Yukon, Bat Masterson (adapting Bat Masterson (TV series)), Tales of Wells Fargo / Man from Wells Fargo, Wanted: Dead or Alive, The Rebel, Bonanza and Hotel de Paree Sundance. Gaylord Du Bois also wrote comic book script adaptations of Zane Grey's western novels for the Dell Four Color Series' "Zane Grey's" issues, which achieved its own numbering with #27 as "Zane Grey's Stories of the West." Du Bois wrote the first issue. In total, he wrote 31 of the series' 39 issues.

Du Bois excelled writing animals: he wrote the entire run of The Lone Ranger's Famous Horse Hi-Yo Silver, the entire run of National Velvet under both the Dell and Gold Key imprints, the first 9 issues of Roy Rogers' Trigger, the first 2 issues of Lassie the 4th issue, and issues #45-63, plus nine Lassie issues of March of Comics, the last issue of Gene Autry's Champion, as well as the animal adventure back-up features Bullet the dog, Lotor the raccoon, Yukon King the dog, Grey Wolf, Blaze the horse, et al.. He also adapted Bob, Son of Battle for Four Color Comics #729.

Du Bois created several American Indian features: "Young Hawk" ran as a back-up feature in Dell's The Lone Ranger #11-#145 (1949-1962). It had first begun in The Funnies, and then appeared in New Funnies, both in 1942. Since Du Bois's pre-1943 Account Books were lost in a house fire, we can only guess that he created Young Hawk. Turok, Son of Stone was created by Du Bois, originally as a Young Hawk one-shot, but Young Hawk and Little Buck were renamed to be Turok and Andar. (Du Bois wrote the first 8 issues.) He also created the American Indian feature The Chief, the first issue of which debuted in Four Color #290, August, 1950. It assumed its own numbering with #2, April, 1951. The title changed to Indian Chief with #3, August, 1951. Gaylord Du Bois wrote all or nearly all the stories for the first four issues. (His stock of remaining scripts were used in at least three later issues (#12,13, and one other), but they mostly appeared in "Indian Chief" issues of March of Comics.) In Hi-Yo Silver, the recurring human character is Keenay, an American Indian.

He also wrote many one-shot comics including the Dell Giant comics Abraham Lincoln, Moses and the Ten Commandments, and The Treasury of Dogs that won him the Thomas Alva Edison Award in 1956.

Adventure novels included the Don Winslow of the Navy series ghostwritten for Frank V Martinek, based on Martinek's comic strip, Barry Blake, The Lone Rider, and The Lone Ranger. A series of books co-written with Oskar Lebeck includes Hurricane Kids on the Lost Island; Rex, King of the Deep; and Stratosphere Jim.

The same decade saw the publication of several books of his spiritual poems and biographical material: Walk Among the Poems of Gaylord Du Bois (1982, Eyrie Publications). The Shining Path: Highlights of a Christian Pilgrimage (1983). (Christian poems). Reflections on the Eyrie (1984). (Poems). A Walk Around Whallons Bay, New York With Gaylord Du Bois (1984, Eyrie Publications). (Letters from Gaylord Du Bois to friend Glenn Morris (the editor) who arranged the correspondence into a narrative form presenting Du Bois' memories and recollections of people, places and events in the Whallons Bay area where he grew up.)

Du Bois came out of retirement to create and write the Christian comic character Bukki in Aida-Zee #1, published in August, 1990 by the Nate Butler Studio.

Retrieved from "https://heykidscomics.fandom.com/wiki/Gaylord_DuBois?oldid=150005"
Community content is available under CC-BY-SA unless otherwise noted.