Part of the 'Fire From Heaven' event 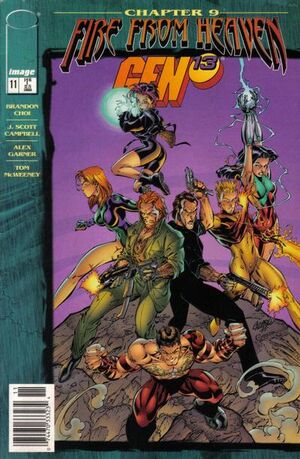 Appearing in "Fire From Heaven, Chapter 9 of 14: Swim Out Past the Breakers, Watch the World Die"Edit

Synopsis for "Fire From Heaven, Chapter 9 of 14: Swim Out Past the Breakers, Watch the World Die"Edit

In a news report, we learn that an American aircraft carrier has stationed itself off the shores of Gamorra. There is fear that the crisis happening on the island may spill out and affect the entire Far East. It is known that the United Nations has sent Stormwatch into Gamorra, but the US government will not comment on the possible involvement of American SPBs.

Back in the lab, the battle rages on. Grunge punches Borgia, unaware of the toxins her skin secretes. In moments, he is unconscious. Rainmaker tries to electrocute Gila, but his cyborg body is well insulated. Instead, he hits her with a neuro-blast. Crimson keeps Minotaur busy by moving too fast for him to react. One-Eyed Jack deals with Lucius and Maggie Monroe while Lynch shoots one of Rake's clawed hands clean off. But then Damocles uses his power to block the flow of trans-dimensional energy into the gen-active people in the room, rendering them powerless. They are quickly beaten, except for Maggie Monroe who is a normal human and thus unaffected. She prepares to face Damocles alone when Kaizen Gamorra knocks her out from behind. Kaizen says that Sigma will surely return to help his now-captive friends, so all they need to do is wait for him. Meanwhile, DV8 has made their escape. They see Stormwatch helicopters heading for the lab and realize they barely made it out in time. Ivana Biaul makes a phone call to find a way to get her and her team off the island.

Damocles and his lackeys teleport out of the lab just as Battalion and Stormwatch soldiers enter. Battalion sees the unconscious forms of the members of Team 7, Gen13, and others, and is impressed when Kaizen claims to have taken them all down on his own. Kaizen wants to keep the prisoners but Battalion threatens to start looking for skeletons in Kaizen's closet, so Kaizen allows Stormwatch to take custody of the fugitives.

Elsewhere, the WildCATs have just teleported to shore from their crashed aircraft. The Daimyo who witnessed the crash also sees them appear, and sends his hunter-killers to attack at the same time that other Gamorran forces (either robots or men in powered armor) arrive and attack from the other side.

On the Moon, Damocles says that he will destroy Earth since that is where Sigma has made his home. The Sword says the destruction will provide them with the energy to slide into the next dimension and continue their quest. However, Damocles says that there was a man in Kaizen's lab, and if that man exists on this world, then Damocles' journey may have come to an end. He begins to absorb the life-force of Earth, causing a strange atmospheric effect across the globe. In Berkeley, the glow hits Dr. Tsung's house and his wife and daughter disappear in a field of energy. Sigma and Deathblow vow to get them back.

At the Stormwatch detention center, the members of Team 7 and Gen13, along with Taboo, Crimson, and Maggie Monroe have been neutralized with blocker-collars. Battalion observes the members of Team 7, whom he knows to be living legends. Something doesn't seem right about this, and he's convinced that Kaizen is somehow involved. Team 7 stands indignantly as their photo is taken, but the Gen13 kids and Crimson ham it up for their mug shot, much to Battalion's exaspiration.

Alex Fairchild reveals to Caitlin that he is her father, which she is overjoyed to learn. Alex mentions how he and Team 7 had to hide the kids from I.O. years ago, which infuriates John Lynch because his son was one of them and he has no idea of his current whereabouts. Fairchild reveals that Robert Lane--Burnout--is Lynch's son. Lynch and Burnout are both in shock. Meanwhile, some Stormwatch guards are roughing up the prisoners but Battalion comes to their defense.

Grifter tries to warn Battalion about Damocles and Kaizen Gamorra, but Battalion says he's just following orders and that he has trouble believing a masked man named "grifter" in the first place. Battalion then gets a message from Weatherman One informing him that Skywatch has been attacked and the assailants are on the Moon, so Battalion prepares to go find out what is happening.

On the lunar surface, Dr. Tsung's wife and daughter are Damocles' prisoners. Damocles talks to them as if he knows them already, and says he will use the life-force of Earth to reconstruct his homeworld and have his family back as well as his revenge against Sigma. He orders a test firing of the Doomsday Engine, which he says will propel the Moon into the Earth, destroying that planet and giving him the kinetic energy needed to jump into the next dimension. In Gamorra, another Earthquake begins. Battalion reveals that these quakes have been happening all over the globe and that an unusual energy signature was picked up in Kaizen's compound and then moments later detected on the Moon. They look up at the Moon and can clearly see the glow from Damocles' Doomsday Engine, and they can see that the Moon is shifting orbit.

Retrieved from "https://heykidscomics.fandom.com/wiki/Gen¹³_Vol_2_11?oldid=1434901"
Community content is available under CC-BY-SA unless otherwise noted.