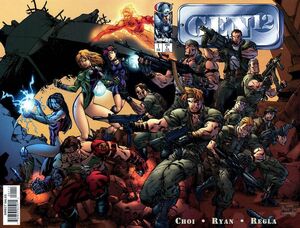 The U.S. press covers the state funeral of IO Director Miles Craven and his subsequent burial in Arlington National Cemetery.  Several members of Team 7 quietly attend.  Later, the Senate Intelligence Oversight Committee led by Senator Douglas Killory views classified footage of a Team 7 mission to Iraq in the 1980s.  The team set up an Iraqi nuclear facility for destruction by an Israeli airstrike.  In the wake of Craven’s death, Killory has appointed Cmdr. Thomas Morgan to investigate the truth of Project Genesis. He briefs Morgan on the history of the project, including the origins of Team 7, Gen 13, and DV8.  Morgan starts his efforts by interviewing Ben Santini, joining him and the Black Razors on a mission to take down a religious cult called the Hand of Glory.  Santini deflects and directs Morgan to Alicia Turner.  Morgan visits her at IO, and she points him to an old friend of Grifter’s in Chicago.  Morgan leaves, unaware Grifter is watching him.