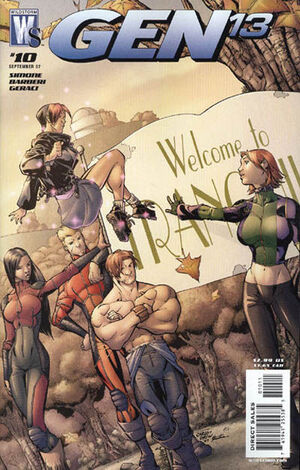 I felt I had this beautiful secret that only a few people could understand.

Appearing in "Fire and Wind"Edit

Synopsis for "Fire and Wind"Edit

Gen13 arrives in Tranquility, where Bobby attracts the attention of a waitress and her jealous fiance at the Chick 'N' Go. Kevin and the Liberty Snots attack Gen13, and a battle ensues. More trouble looms as the Authoriteens watch on.

Retrieved from "https://heykidscomics.fandom.com/wiki/Gen_13_Vol_4_10?oldid=1580200"
Community content is available under CC-BY-SA unless otherwise noted.