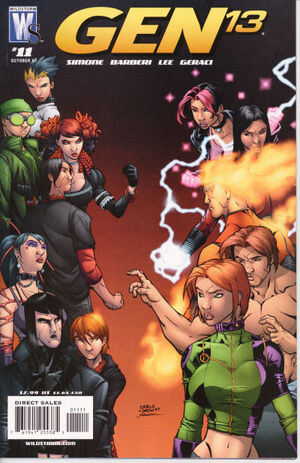 Appearing in "Battle of the Band of Brothers"Edit

Synopsis for "Battle of the Band of Brothers"Edit

Gen13's squabble with the Liberty Snots is interrupted by the arrival of the Authoriteens. The Authoriteens have decided to erase the disruptive existence of Gen13. Sweet Sally decides to abandon "the tourists" and leave them to their fate, much to the chagrin of M-T. Gen13 defends itself from the much more powerful Authoriteens, but they don't stand a chance. In downtown Tranquility, M-T convinces the group to return and defend Gen13.

Retrieved from "https://heykidscomics.fandom.com/wiki/Gen_13_Vol_4_11?oldid=1580213"
Community content is available under CC-BY-SA unless otherwise noted.