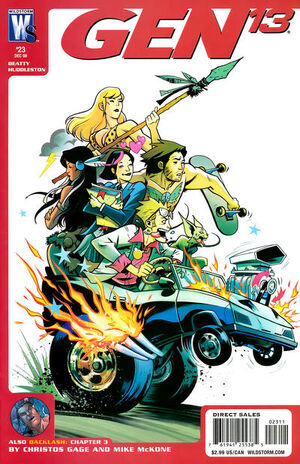 Anybody who's seen any apocalyptic movies knows one unalterable truth... Bad things always happen at the mall.

Appearing in "Teenage Wasteland - Part 3: What Did You Want to Be When the World Blew Up?"Edit

Synopsis for "Teenage Wasteland - Part 3: What Did You Want to Be When the World Blew Up?"Edit

The kids take a well deserved breather after escaping the anti-superhuman group. They each tell stories about the end of the world and what could have been.

Percival Edmund Chang in "Buggin' Out"

Freefall talks about having a normal life even with her powers. She thinks about making good grades in school, joining the cheerleading squad, and even having a home to come to with someone to care for her. She mentions the town of Tranquility as being the place best suited for their kind.

Burnout talks about actually keeping music alive in the post-apocalyptic world. He talks about having a mobile radio broadcast and sending out music to all the survivors.

Sarah Rainmaker in "Baby, the Rain Must Fall"

Rainmaker tells of a time when she'll depart from the other kids after meeting up with a female Indian ruler. She will see it as a chance for change and a time to grow into a new life that does not involve Gen13.

Fairchild talks about escaping to an isolated place where she could read her books and no one would bother her. Her story takes place in TR's monster reserve inhabited by a colony of Qeelockes, among other monsters and animals. While Caitlin's peacefully reading, a Tyrannosaurus Rex arrives and menaces her. She first scares the prehistoric beast by firing a machine gun but then ends up taking it for a walk after it pleads with her by holding its leash in its mouth.

As the kids tell their stories to one another, the child Megan and the infant Dr. Cross continue their trek across the wasteland to find the Gen13 kids.

When they're finished with their stories, the Gen13 kids come upon an abandoned shopping mall.

After using his ability to turn into mist and making it to the 3rd level of the Internal Operations Research facility, Marc Slayton fights his way to a weapons storage unit. Once inside, he attaches two machetes to compensate for his missing leg and proceeds to arm himself with a flame thrower. Before he engages the monsters on the current level, he sets a bomb that will detonate in ten minutes and ensure that none of the monsters with escape the facility. Unfortunately, he now has a time limit to escape the facility as well.

Retrieved from "https://heykidscomics.fandom.com/wiki/Gen_13_Vol_4_23?oldid=1580218"
Community content is available under CC-BY-SA unless otherwise noted.