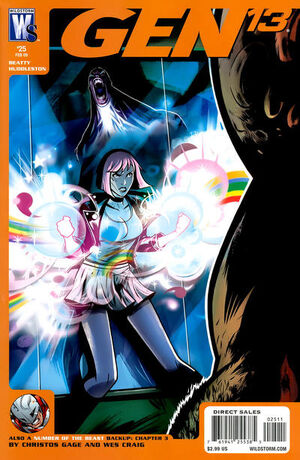 Bobby, if you can really see then lay down some firepower between us and them! Our fearless leader needs help and she's too proud to ask for it from me!

When Roxy realizes Dominic intends to rape her, she gets royally pissed. She uses her powers to levitate Dominic up through the roof of the mall and tosses him high into the stormy sky.

Meanwhile, Grunge is in the a candy store and has accidentally absorbed the properties of the candy into his body as a horde of rats attack him. The rats mutate and pile on Grunge.

Sarah, Bobby and Caitlin are still with the group of survivors they let into the mall. Bobby continues to test his new ability to see things in infrared and notices something strange in the bodies of the refugees.

Roxy waits for Dominic to fall back down and see if he's learned his lesson. To her horror, Dominic does indeed come back down but is now mutated into an incubite. The same thing happens to the refugees with Sarah, Bobby, and Caitlin who are forced to run for their lives.

Grunge continues his battle against the mutant rats. Thinking he's found a way to outsmart them, Grunge finds what he thinks is a piece of gum. He decides that it will be harder for them to eat him if he absorbs it. Unfortunately, he quickly finds that it is not gum, but taffy that he has absorbed.

Roxy and the others continue their fight against the Incubties. One of the Incubites throws up on Caitlin. After fifteen minutes pass the Incubites explode but Bobby is able to incinerate them as they do, thus not spreading the infection. Grunge survives the rat attack by absorbing a jawbreaker and Roxy helps him finish off the rats.

The team decides that their best bet is to try the town of Tranquility. Grunge suggests that on the way they stop at some of their favorite places. Unsurprisingly, he picks a place to go skate-boarding.

The child Megan and the toddler Dr. Cross arrive at the mall and Megan deduces what happened when she sees the Incubite corpses.

As the team begins their journey, Caitlin shows signs of being sick.

After he has rounded up all the villains, Miles Craven begins sending Missile Man after heroes to introduce to the Number of the Beast program. Reluctantly, Missile Man agrees until he's ordered to capture an old flame named Ingenue. He decides to go A.W.O.L. and take Ingenue with him. Unfortunately, Ingenue found out that the government was after her and decided to commit suicide than be introduced to the N.O.T.B. program. Missile Man grieves for his lost love but then heads after the man he blames for her death...Miles Craven.

Retrieved from "https://heykidscomics.fandom.com/wiki/Gen_13_Vol_4_25?oldid=1579638"
Community content is available under CC-BY-SA unless otherwise noted.