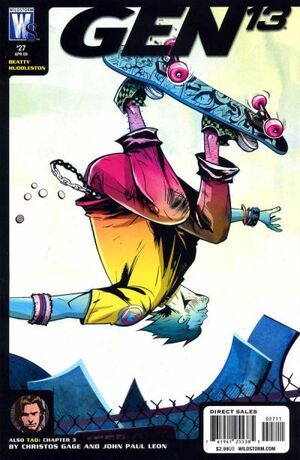 Who are you hiding from? In the old world I was labeled a villain. A rogue. One of the so-called "bad guys." What did they call you?

The kids have arrived at SK8-GRA-LA, a skateboarding park Grunge wanted to stop by on their way to Tranquility. They have hitched a ride by a wayward traveler who reveals himself to be Dr. Sin (from Number of the Beast). He is very candid with the kids about who he is and the fact that he was a considered a villain. He also makes it known to the kids that he knows they're special and asks them who they're hiding from. With that, he drives away leaving the kids wondering what he was talking about.

They arrive at the skate park to find it fortified by wrecked cars, lit by massive torches, and populated with nothing but huge skate ramps and not an adult in sight. Grunge tears up at the beauty of it all. When the guards won't let them in, Sarah comes close to using her powers. But Caitlin stops her, telling her no powers unless they're legitimately threatened. The guards warn them that their dog can detect adults but Caitlin shows it kindness, thus making the dog like her and they are allowed to enter. Once inside, Caitlin suggests that they all stick together but the others quickly head off in different directions leaving her on her own.

Caitlin approaches a vendor selling soup. But she quickly realizes that the guy is seriously high and tries to get away from him as fast as she can. Holly Denton (aka Breakdown of Gen 14) is talking with with a guy when Caitlin runs past her. She then takes off running after Caitlin.

Unbeknown to both of them, the child Megan watches from afar through binoculars which identify both kids to her. She rushes back to tell Dr. Cross. The toddler Dr. Cross seems to be developing his intelligence quicker than his body growth. However, he still has the tendencies of a child as he explains to Megan he's written out a formula but had to do it with his own poop because she put the crayons out of his reach.

Back at the skate park, Roxy is enjoying a concert by a favorite band of hers called Def-Con 5. She tells the lead singer she's glad they survived Armageddon but he tells her that they're being held against there will. The kids of SK8-GRA-LA won't let them leave!

Caitlin finds Bobby by a group watching reruns of the show "Jackass". They head off together discussing whether or not to try the soup. They pass Sarah who's enjoying some alcohol. Holly walks up to Sarah and tries to introduce herself but Sarah hands Holly the bottle and runs off.

Grunge meets Rodney "Street Pizza" Patterson, who appears to be the leader of SK8-GRA-LA solely because he survived the skate ramp called The Meat-Grinder. When Grunge sees the ramp he quickly realizes where the name comes from. The ramp is a literal death-trap complete with barb wire, spikes, and fire!

Caitlin and Bobby set up a tent and relax for a bit. As Bobby tells Caitlin that this place just seems wrong considering the state of the world, Caitlin grabs Bobby's face and kisses him. Sarah sees it and gets pissed. So much so that a small rain cloud literally forms above her head much to the surprise of some of the locals around her. She storms off and leaves the skate park.

As Grunge prepares to brave The Meat Grinder, Rodney lets him know that those who don't survive go into the soup.

In the tent, Bobby asks Caitlin if they should talk about what just happened. As she comes close to him, she only says, "Tomorrow."

Back at the concert, Roxy is enjoying a stage dive when she gets dumped onto the ground at the back of the crowd. Someone calls Roxy by her name and she turns to see Megan and Dr. Cross in miniature Rat-Catcher uniforms aiming some sort of weapons at her.

Appearing in "The Tao of Tao - Part 3"Edit

Synopsis for "The Tao of Tao - Part 3"Edit

As Void and Providence continue their battle, Tao continues to tell Providence how he manipulated events that led to Armageddon. He shows how he made sure forces like The Authority and Stormwatch were preoccupied (during events of The Authority: Prime) while he marshaled his forces and gathered supplies.

He tells her how he enjoyed using Void's power to manipulate some of the world's most powerful heroes such as Majestic. And states how he even tricked Void herself into thinking that by her appearing before chosen heroes (as seen in Wildstorm: Armageddon) she could prevent Armageddon when in reality, Armageddon was a foregone conclusion and the heroes were nothing more than pawns. However there were some he was unable to control, like John Lynch, but he considered these heroes too weak to even be bothered with.

Finally, he tells Providence that he studied Void and learned about the Orb of Power which contained the essence of creation itself and is what transformed Nikola Hanssen into the new Void. He also learned that there were others who contained parts of this essence which is why he's come after Providence.

Void blasts Providence one last time and she finally falls. Tao tells Providence that he intends to collect all of the ones who contain parts of the essence as he stands over her defeated body, ready to restrain her.

Retrieved from "https://heykidscomics.fandom.com/wiki/Gen_13_Vol_4_27?oldid=1580226"
Community content is available under CC-BY-SA unless otherwise noted.