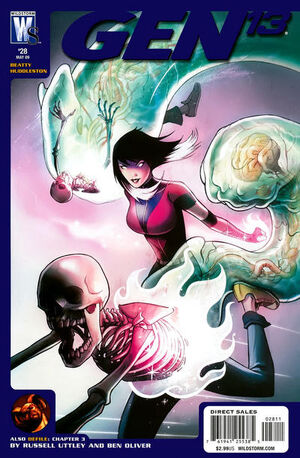 I don't understand! Lower-case 't'...or a cross?! Are you saying vampires did this to you?!

Grunge navigates the perils of the The Meat Grinder on his skateboard. He makes it through alive and waits for the denizens of SK8-GRA-LA to give him a hero's cheer. But all he gets is a resounding "No Soup for You!" from the audience.

Fairchild stops herself and Bobby before things get too hot and heavy. She lets him know it's not a rejection, only a time out for now. As she exits their tent, Holly Denton (aka Breakdown of Gen14) is standing there and acknowledges Fairchild by name. Thinking Holly is from Internal Operations or Tabula Rasa, Fairchild grabs Holly's hand and demands to know how she knows who they are. Holly uses her powers to burn Fairchild's hand and pleads for them to listen to her.

On the outskirts of SK8-GRA-LA, Sarah wanders alone after seeing Fairchild and Bobby together. A voice seems to be guiding her somewhere and trying to comfort her as she continues on.

Meanwhile, Freefall is being held at gunpoint by the toddler Dr. Cross and the child Megan. Freefall is not amused and proceeds to pick up Dr. Cross and spank him. But Megan shoots a gelatinous blue substance from her gun that encases Freefall.

Grunge is now the new king of SK8-GRA-LA, must to the displeasure of the former king, Rodney. He challenges Grunge again and attempts The Meat Grinder. He comes out of it severely hurt and his former subjects are ready to turn him into soup. Grunge pleads with them not to do this, but they argue with him that this is how they survive.

As Dr. Cross and Megan roll Freefall away, Dr. Cross appears to trip and they lose Freefall who is still inside the blue goo.

Bobby tries to attack Holly for hurting Fairchild but she neutralizes his flames with her powers. Then they notice that some of the SK8-GRA-LA citizens have Freefall in her ball of goo. Fairchild tells Bobby to watch Holly and she rescues Freefall.

Grunge continues to plead with the others not to throw Rodney in the soup but then one of them pushes Grunge into the soup.

Dr. Cross and Megan charge at the kids. The Gen13 kids now think Holly lied to them and that she led these Ratcatchers to them. As Dr. Cross tries to encase them all in the blue goo, Fairchild grabs him and removes his mask. But instead of the toddler's face he had earlier, Dr. Cross' appearance is now that of an old man.

Rapier, Lord Prime Sorcerer of Daemon, has come to Earth to assess if it's viable for Daemonite colonization now that it is in ruins. Lord Defile intents to prevent him from doing so but in order to accomplish this, he needs a source of great power.

He travels to Ellis Island believing that there is an object there connected to the torrent of emotional energies released there. While walking up the stairs of separation, Defile muses about the twelve million lost souls (referring to the immigrants) that stood in terror in that spot all those years ago. He then proceeds to break off a piece of the banister claiming it will do and looks towards New York, ready to confront Rapier.

Retrieved from "https://heykidscomics.fandom.com/wiki/Gen_13_Vol_4_28?oldid=1580231"
Community content is available under CC-BY-SA unless otherwise noted.