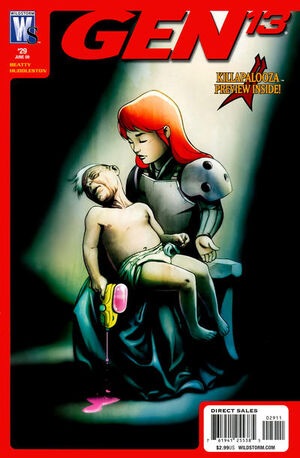 YOU TINY BASTARD! This is the thanks I get for tending to your every need?! The uncountable poopy diapers? The endless infuriating colic? And what of facilitating your unfulfilled dreams of vengeance upon these meddling teenagers?!

Appearing in "Teenage Wasteland - Part 9: No Country for Old Gens"Edit

Synopsis for "Teenage Wasteland - Part 9: No Country for Old Gens"Edit

As Grunge falls into the giant vat of soup, the other Gen13 kids are still held in Megan and Dr. Cross's gelatinous blue goo. Megan fears that Dr. Cross, whose body is still toddler size but appears to have aged rapidly, is dying. He tells her that she released him from his clone-pod too early and that is why this has happened to his body. As the citizens of SK8-GR-LA wait for 'Grunge soup' Megan and Dr. Cross escape.

Grunge emerges from the soup having taken on the characteristics of the protective lacquer of his skateboard. However, he quickly finds that while it is heat-resistant, it shatters too easily-a point driven home by a skateboarder who smacks Grunge with his skateboard and cracks his arm.

Elsewhere, the Native-American woman named Kachina has the sorcerer Mago (of The Paladins) captured. She demands that he tell her how to unlock the secrets of his bag of talismans. Frustrated by his lack of cooperation, she claims she can do it without him. Mago then uses his magic to disappear. As her followers question how she'll make it rain now without Mago, Kachina tells them that they don't need him, only a Rainmaker.

At that moment miles away, Sarah takes off flying into the air.

Caitlin, Roxy, Bobby, and Holly finally use their powers and escape from the gelatinous blue goo. As each of the kids still hold their suspicions about who Holly really is, the group is made aware of a huge fight happening at the soup bowl.

Grunge has taken on the properties of the bowl and has begun a massive beat-down on the citizens of SK8-GRA-LA who are determined to eat him. The others join in and are quickly able to fend off the rampaging citizens. But one skater makes it through and stabs Caitlin in the back with a knife. Caitlin is shocked to see blood considering her skin is supposed to be impenetrable. Holly uses her powers to dispatch of the skater in a most gruesome manner by melting his body, and leaving only his skeleton untouch. The others are left speechless by Holly's display of power. As they tend to the injured Caitlin, Megan drives up in her vehicle and offers to help.

Retrieved from "https://heykidscomics.fandom.com/wiki/Gen_13_Vol_4_29?oldid=1580232"
Community content is available under CC-BY-SA unless otherwise noted.