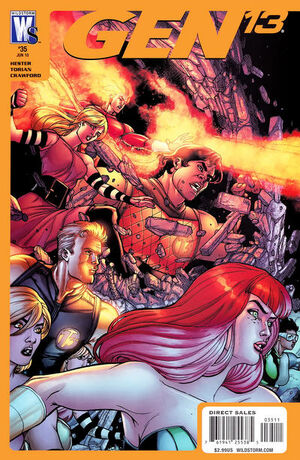 Appearing in "Pocatello Part One: Pathcutter"Edit

Synopsis for "Pocatello Part One: Pathcutter"Edit

The kids are out on their own again after defending the world against the dual alien invasion of Sliding Albion and the Knights of Khera. The team now consists of original members Fairchild and Burnout as well as Ditto, Runt, Hardbody, and Windsprint of Gen14. They are all exhausted but it's Runt who finally collapses. He's stuck in his giant form and can't change back because he's so weak. Burnout strongly stated that they can't leave him behind because they're all family now but Fairchild begs to differ. She's obviously still hurt about Freefall's departure on the Authority's Carrier and Grunge staying behind with the other heroes who fought off the alien invasions.

They decide to set up camp and Fairchild takes out Ragamuffin (formerly a villain in the Fearsmiths who defected to The Paladins) and begins to stitch her back together. As the kids settle down, someone appears to be observing them from afar. The kids find a "wagon-train" that is being attacked by some bikers. As they fight off the raiders, whoever is watching them is marveling at how they are able to work together and take out the threat. The Gens talk with a man named Pathcutter who is leading this wagon train (he was the one observing them by "feeling" that they were close by since they were S.P.B's). He thanks them but then angered when they ask for food in return for their help. They take only what they need and leave.

Back at the camp, one of Ditto's duplicates goes beyond her range of sensing and gets lost. She sends a second duplicate to find the first. She finds a giant robot attacking her. Runt arrives and smashes the robot but it weakens him even more. The others arrive and give Runt some food. They soon find that Ditto's third duplicate has run away even though they can't figure out how that can be. Pathcutter arrives and ask if they'd consider guarding his caravan. He tells them not only will they share their food but they'll let the team join them at their destination: Pocatello, Idaho. A town where Earth's survivors created a self-preserving haven. The kids agree.

While en route, they run into a huge herd of robots, (presumably from the Church of Gort) and they decide to draw them away from the caravan. Unfortunately, there are too many robots and the team is soon surrounded.

Retrieved from "https://heykidscomics.fandom.com/wiki/Gen_13_Vol_4_35?oldid=1580204"
Community content is available under CC-BY-SA unless otherwise noted.