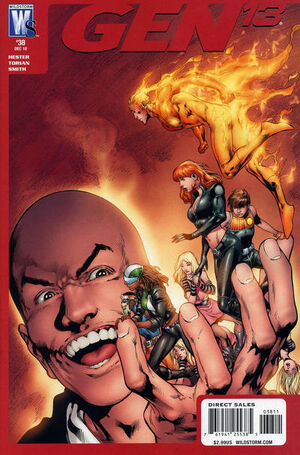 You know, I don't make a habit of talking back to people who could punch me into jelly, but I'll be damned if you don't have this coming. Open eyes, girl. Look around you. This is the end of the #@%& world. Everyone you meet, and I do mean everyone, has lost just as much as you have--if not more. Lovers, families, children. Throw a rock and you'll hit someone who's lost a whole hell of a lot more than you. Everyone is sad. Everyone is scared. Everyone is hanging on by a thread. I've been rolling with you and yours for a long time now and I've come to admire you just about as much as everyone I've ever met. But your mood swings give me whiplash. One minute you're the grieving widow, the next you're the bright and shiny kick-ass heroine. So, yes, I do know what's going on inside of you because I feel that pain myself every day. But there's a bunch of kids in that jeep, and a city full of people back in Pocatello that need to be one thing and one thing only...they need Fairchild, the leader of Gen 13. The good guys.

Pathcutter, now don in his costume as Seek, has broken his sister out of the hospital as Pocatello is under attack by Kaizen X and his army.

Burnout's body is gone and all that remains is a flaming skeleton held together by the radiation he absorbed from the nuclear meltdown. Fairchild tries to get near him but he tells her that if she does, he'll kill her with all the radiation he's emitting now. He tells them to leave him behind and Fairchild reluctantly agrees.

As Kaizen X's assault on Pocatello continues, Sheriff Jerry and the Mayor tries to hold out against the invaders. Sheriff Jerry expresses his suspicions that Kaizen X's sudden arrival is connected to Gen 13's arrival and Emily's sudden disappearance whom the town had depend on her, but the Mayor hardly believes it. A runner then arrives and informs them that more of Kaizen's forces are arriving at different parts of Pocatello, which would mean that the residents will have to fall back and that their ammunition for their guns will soon expire.

On their way back to Pocatello, Fairchild finally breaks down under the weight of losing all her friends. Windsprint catches up to her and gets her to snap out of it by reminding her that there are still people who need her. Just when Fairchild agrees, Pathcutter shows up with his sister. He reveals that Pocatello was using Emily's power to cloak to hide the entire town and as well informing them of the town's attack in which Pathcutter intends on leaving the residents to their fate; however, Gen 13, despite what the residents did to Emily, intends to help Pocatello much to Pathcutter's anger who is then reason by Fairchild that what the residents did was out of fear to protect themselves and assures that they will answer for what they did to his sister. Sheriff Jerry shows up to them on horseback to try and take back Emily at gunpoint but is easily subdue by Windsprint. They then head back to try and take Pocatello back from Kaizen X.

The kids reach Pocatello in time to save the Mayor and the surviving citizens from Kaizen X's last push into the city. Kaizen X and Fairchild engage in hand-to-hand combat again, but is immediately interrupt by Runt who tells them that there is another matter that concerns everyone: he points out to the sudden arrival of rogue robots that Gen 13 had previously encountered.

Retrieved from "https://heykidscomics.fandom.com/wiki/Gen_13_Vol_4_38?oldid=1580211"
Community content is available under CC-BY-SA unless otherwise noted.