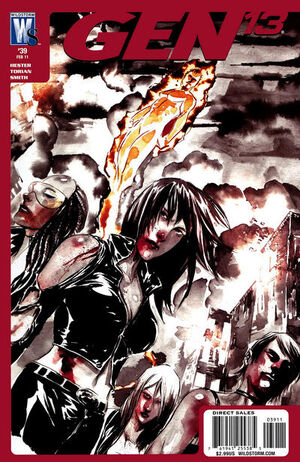 Hardbody has returned with his army of robots in order to challenge Kaizen X and his army. But as the two armies fight, Kaizen X continues his attack against the Gens themselves. Fairchild engages Kaizen in battle again. She holds her own against him for a while but he stills proves too strong for her. Just then, Burnout appears and he has mastered some control over his new body. He is able to knock out Kaizen for a while.

But Kaizen keeps coming back for more. Burnout tells them he can see Kaizen's suit is what's giving him his power. It comes from strategically placed cell towers from the nearby mountain ranges that feed energy to him. Windsprint sets out to begin deactivating them but Kaizen tells them they'll all be dead before she can finish. But Pathcutter's sister Emily steps up and uses her power of concealment to hide Kaizen from his own towers. In doing so Emily loses her powers. This leaves his suit powerless and allows Fairchild to defeat him. He then hits a self-destruct button but uses it as a decoy to escape by rocketing out of Pocatello, but only for it to explode seemingly killing Kaizen.

The Gens help with the clean-up of Pocatello from the damages caused by Kaizen. Bobby decides he will be a literal beacon of light guiding refugees to the town and will also act as a deterrent to any villains or hostile intruders who wants in. Fairchild tries to tell Burnout how she feels out him but is unable to say it. But Burnout gets what she's trying to say and flies away all smiles ready to be a beacon of light for all to see.

Retrieved from "https://heykidscomics.fandom.com/wiki/Gen_13_Vol_4_39?oldid=1580199"
Community content is available under CC-BY-SA unless otherwise noted.