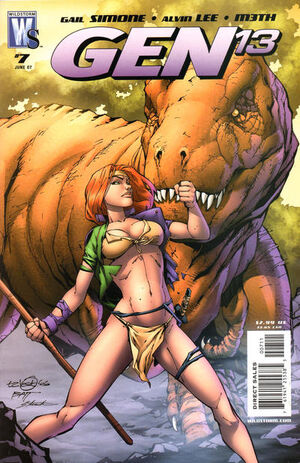 And everything here will try to hunt us.

Appearing in "When Caitlin Ruled the Lizards"Edit

Synopsis for "When Caitlin Ruled the Lizards"Edit

Gen13 flees the badly damaged Tabula Rasa headquarters. Together, they elect to escape through the teleportation device to an unknown location. Caitlin, putting on a brave face for her team, goes through the device first. Unfortunately, she lands in a river, and cracks her skull on a rock, knocking her unconscious. While unconscious in the river, she dreams of her now-deceased mother, who reveals that even though Caitlin was just a job, she did love the girl. Her mother urges Caitlin to wake up. She regains consciousness, and is attacked by a saber-toothed tiger. She kills the animal in self-defense and takes stock of her surroundings. She builds a temporary shelter to house her from the rain, and the next day skins the tiger to make new, more practical clothes for herself. Meanwhile, Eddie is trying to convince his team-mates to form a new, nude society with him, but they decline. Bobby proposes that they head for the highest ground, a volcano, to make a signal for her, but they are attacked by a looming monster.

Caitlin continues to search for her missing team-mates, evading dinosaurs and other dangerous animals. She, unfortunately, gets tracked by a Tyrannosaurus Rex. She is about to be eaten alive, when the dinosaur speaks to her. She convinces the animal not to kill her, and curses Tabula Rasa for giving thoughts and feelings to an animal not intended to have them. Just then, the T. Rex is shot by an old man in a safari outfit. She disarms the man and his goons, and leaves him to the "unmercy" of the local life. Leaving the carnage humanity behind her, she finds Roxy, Bobby, Eddie, and Sarah. Together, they leave the hunting reserve.

Retrieved from "https://heykidscomics.fandom.com/wiki/Gen_13_Vol_4_7?oldid=1580202"
Community content is available under CC-BY-SA unless otherwise noted.