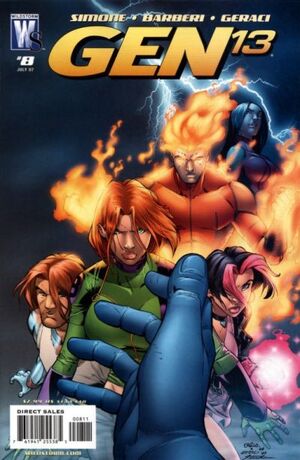 Caitlin might be able to lift a truck -- but I know I'm the strongest of us.

The kids of Gen13 begin their journey to Tranquility, at Bobby's suggestion. During their down time, Roxy strengthens the team's bonds by firmly establishing an emotionally supportive network. Their stolen Jeep eventually runs out of gas in a desert, so the team sets out on foot. They come across a mall, where Roxy provides food for the group by shoplifting from a posh grocery store. The shop worker there calls the police who confront the teen. She uses her gravity-manipulating powers to escape, thus earning one officer's wrath, causing him to pull a gun on the group. Roxy uses her powers to throw the cop car into the mall, and the group escapes. They make their way to a field where they eat their haul and reflectively watch the horses in the field. Midnighter, Apollo, and Swift of the Authority appear to collect the teenagers as their very existence threatens the Multiverse. The two super-powered groups do battle, with the Authority maintaining the upper hand, until Roxy makes an impassioned plea to the Midnighter, convincing him to leave the teens alone.

Retrieved from "https://heykidscomics.fandom.com/wiki/Gen_13_Vol_4_8?oldid=1580214"
Community content is available under CC-BY-SA unless otherwise noted.