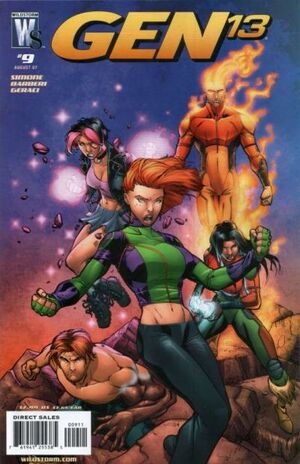 Ah, dang kids with their sarcasm an' videa games.

Appearing in "One Shot of a Long, Dark Road"Edit

Synopsis for "One Shot of a Long, Dark Road"Edit

Sarah struggles internally with a secret she wants to share, especially with Caitlin. Gen13 stops their trip at Phil's farm, where they do chores to earn their stay. Unknown to the group, John Lynch is watching the kids, and witnesses Sarah kiss Caitlin, taking both Lynch and Caitlin by surprise. Caitlin professes she doesn't know what she wants, but loves Sarah as a friend. At this time, Maxine Spaulding appears to rescue her adoptive daughter. Thinking Maxine has come to kill Gen13, Lynch shot her. Sarah rescued Roxy and Max, and directed Caitlin to where the shooter was. After a brief battle, Lynch explained that the existence of Gen13 and his own existence threatened reality. Maxine and Lynch send the kids on their way and stay behind to fight off the ratkillers TR sent. Gen13 makes their way to Tranquility, during which time Sarah finds her friends accept her homosexuality without judgment or reservation.

Retrieved from "https://heykidscomics.fandom.com/wiki/Gen_13_Vol_4_9?oldid=1580219"
Community content is available under CC-BY-SA unless otherwise noted.