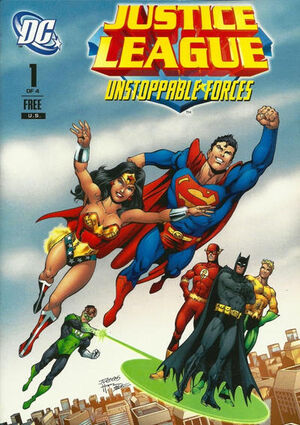 *Sploosh* Everyone hear that? I think the tide has turned in the Sea King's favor...

The Justice League of America stop Shaggy Man dead in his tracks in the Arizona desert when Green Lantern drops a mountain on him. A year later, the town of Justus is built around the mountain. Another year later, the Shaggy Man wakes up, breaks free of his mountain prison, and goes on a rampage! Knowing that they can't stop him the same way twice, THe Flash visits the Shaggy Man's creator, Professor Andrew Zagarian, in jail for ideas. The Flash learns that the Shaggy Man gains his power via photo-synthesis through his shaggy covering, through some quick team-work, the give the Shaggy Man a shave, and then dump him off on the dark side of the Moon.

Retrieved from "https://heykidscomics.fandom.com/wiki/General_Mills_Presents:_Justice_League_Vol_1_1?oldid=1433332"
Community content is available under CC-BY-SA unless otherwise noted.