Part of the 'Regenesis' event 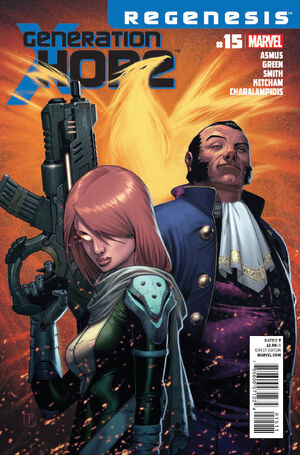 I can control them completely. You want to see that else I can do? Keep pushing me

Cyclops is none too happy to see Sebastian Shaw, whom the Lights assumed was a new mutant. He calls on Psylocke and Danger to quickly subdue him. Hope protests their abrupt behaviour but Cyclops tells her that they'll discuss this in private.

As everyone goes inside, Martha Johansson glees at finally having a new body while Velocidad voices his disapproval with Cyclops, having accelerated himself three days through time. Unfortunately, Dragoness, Random, Bliss, Erg and Litterburg turn up to have a chat with them.

Cyclops and Emma have a telepathic conversation regarding Shaw. The latter admits to having Shaw moved and his memory wiped after refusing to execute him. Back in the physical world, Cyclops informs Hope of who Sebastian Shaw was, what he did, which included genocide of mutants. Hope disagrees, stating that Shaw is not who he once was. She calls on the X-Men for not offering aid to every mutant such as Shaw before she insults Emma, causing her to slap the young Messiah. Cyclops prevents the two from fighting but reminds Hope that Shaw's crimes can't just evaporate. Hope won't have it and states that Shaw should be on her team.

Outside, the Lights are coming to blows with the other mutants, who accuse them of getting special treatment. Transonic retorts that they use to be part of the Mutant Liberation Front. This results in a big brawl between the two sides before Zero's techno-organic mass goes out of control. When Emma senses the dispute, Hope runs out and put a stop to it all.

Cyclops later shows Hope Shaw's file and advises her to think twice of what she thinks of him. The last panels of the issue include Velocidad finding a white hair, Transonic grieving in her room and Zero planning on coming after Hope.

• Generation Hope clash with a gang of mutant villains living on the island! • Romance blossoms between Marvel’s most unlikely couple!

Retrieved from "https://heykidscomics.fandom.com/wiki/Generation_Hope_Vol_1_15?oldid=1488468"
Community content is available under CC-BY-SA unless otherwise noted.