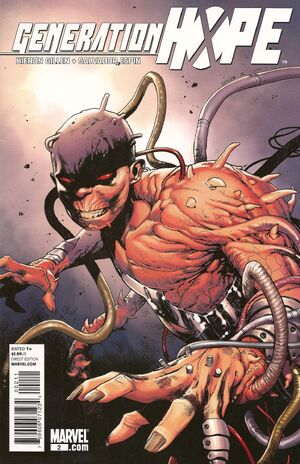 I'm used to minds leaving their muddy fingerprints all over mine...but that was something. His mind isn't a mind. His mind is his body. It doesn't know where it starts or ends. He's having a nightmare and we're all having it with him. It got a taste, and just recoiled from it...but he's trapped in there. It's not his fault.

Kenji has captured Hope and pinned her to the wall, showing her a vision of a devastated Tokyo. Outside, Cyclops berates the Lights for getting in the way. Rogue then copies Laurie's power to join Wolverine and Cyclops as Hope copies Kenji's power. Naturally, this exhausts the latter, though Gabriel manages to catch her before Rogue could.

Kenji then goes on another rampage as he destroys a tanker truck. In response, Idie freezes the burning vehicle before unleashing her pyrokinesis on Kenji. Cyclops and Wolverine then pursue the mutant to a nearby lake to dose the fire. Rogue tries getting in close to copy his power and subdue him but is overwhelmed. Recovering, she tells Cyclops that Kenji has become trapped within his own body. Then suddenly, Kenji transforms into a giant monster. Unwilling to let innocents be harmed by his rampage, Cyclops declares that they must do whatever it takes to bring him down.

Retrieved from "https://heykidscomics.fandom.com/wiki/Generation_Hope_Vol_1_2?oldid=1430765"
Community content is available under CC-BY-SA unless otherwise noted.