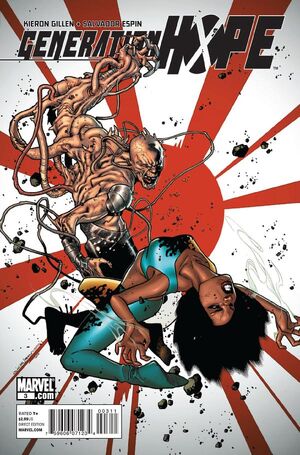 You say I'm your future. I'm here to save you or something. I'm starting to think...I dunno, maybe I am. But I need your help. Back me up, Scott. Let me be your messiah.

Hope has a vision of the Phoenix before waking up. She rallies the other Lights, and they go to stop Kenji. But it's a tough battle with Kenji's massive techno-organic mass. Hope mimics his power and sends a techno-organic bug to sting Cyclops, giving him a mental message to plead him to let her save the day, to prove that she is the mutant messiah.

Hope manages to make contact with Kenji, who remains as pessimistic as ever, before stabilizing him. As she tells Cyclops, "Told you so." she collapses.

Tokyo burns with the genetic heat of the final light. Can Generation Hope tame it, or will the X-Men have to snuff it out? The first battle for the future of mutantkind comes to a climax, with Bio-titans fighting between the sky-scrapers when hope and despair come to blows. The first arc of the most-anticipated new book of 2010 concludes! Part 3 (of 3)

Retrieved from "https://heykidscomics.fandom.com/wiki/Generation_Hope_Vol_1_3?oldid=1430766"
Community content is available under CC-BY-SA unless otherwise noted.