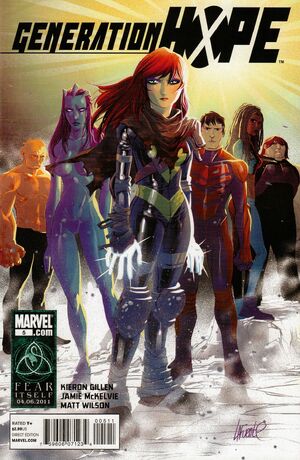 Appearing in "The Daddy Issue"Edit

There was an upside to rushing from nation to nation, saving suicidal or homicidal mutants from themselves. It was a distraction. Cable is still dead. Hope has lost her father. Now, with a moment to breathe, she has time to think... and HAS to think. Not least because everyone else wants to mold her in their image. In this issue, Generation Hope's future is decided.

Retrieved from "https://heykidscomics.fandom.com/wiki/Generation_Hope_Vol_1_5?oldid=1649268"
Community content is available under CC-BY-SA unless otherwise noted.