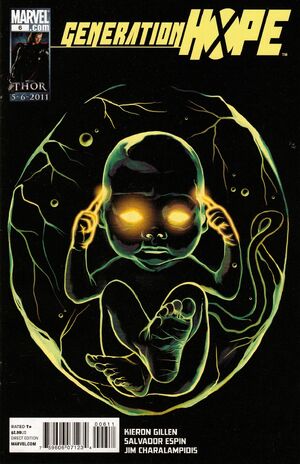 Appearing in "The Ward (Part 1)"Edit

“THE WARD,” Part 1 of 3 THIS STORY WILL BE TALKED ABOUT FOR YEARS! A new light pings into existence on Cerebra. A new mutant life is out there. A new mutant life needing Generation Hope’s help, before his nascent power consumes him. Can the newest team of mutants in the world save this newest mutant? If you miss this, you only have yourself to blame.

Retrieved from "https://heykidscomics.fandom.com/wiki/Generation_Hope_Vol_1_6?oldid=1650954"
Community content is available under CC-BY-SA unless otherwise noted.