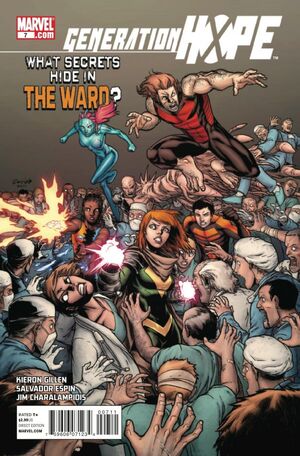 It's a boy. And I think he's going to grow up to be very special.

Appearing in "The Ward (Part 2)"Edit

Synopsis for "The Ward (Part 2)"Edit

Out the hospital, Idie is talking with Kitty and comments that she must be blessed to be in a loving relationship with Colossus. However, she soon discovers that she's not married and takes back her words.

Inside the hospital, all of the patrons and staff are charging against the Lights. Hope orders Teon to grab the expecting mother of the Sixth Light. However, this only frightens the unborn baby, who then begins to enthrall everyone in the city, who begin charging towards the hospital. Laurie flies outside to carry Idie far out of range. As she flies high up into the sky, her form becomes more slender and alien.

As they attempt to flee from the zombies, Hope analyzes that the Sixth Light will burn them out. And worse, Because Kenji can't protect everyone at once. He manages to jack in Laurie and Idie. Laurie explains her theory that perhaps the Sixth Light doesn't want to be born, given that babies suffer memory loss from the birth trauma, akin to his world ending. Therefore, they must convince him that being born is worth living. Kenji then jacks in the Sixth Light's mother so they could communicate with him. But Hope fails to make a convincing argument, Laurie confuses him with big words about economics, Idie tells him about Hell and Kenji being non-responsive. Hope then gets a signal form Teon that he wants in. His simple expression calms the baby. As they carry his mother back to a bed, Teon tells the Sixth Light in simple words of the things he can do in the physical world, such as eating, fighting, mating and living. Instantly, the Sixth Light shoots out of his mother's womb and into Hope's arms and freeing everyone from his thrall.

As the Lights walk out of the hospital in triumph, Kitty walks up to inform them that Teon's family has inputted legal action to reclaim him.

Retrieved from "https://heykidscomics.fandom.com/wiki/Generation_Hope_Vol_1_7?oldid=1544477"
Community content is available under CC-BY-SA unless otherwise noted.