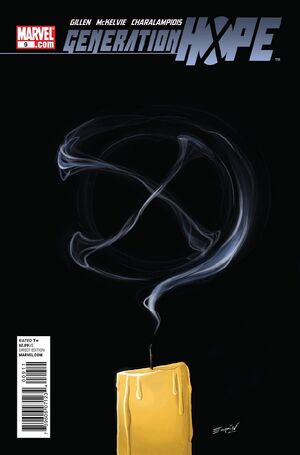 We have to be better.

Hope and Velocidad find Phoebe Cuckoo sitting at Cerebra alone, trying to keep her company. Phoebe tells them through her telepathy, she is never alone, for she sees thing through her sisters' eyes. As they decide to excuse themselves, Velocidad asks Hope why they came down to Cerebra anyway. Hope admits that she knows that a new Light will turn up. Velocidad asks if they can make out while wait. Hope gives a flat "No."

In the UK, University of Sheffield, three students are in the middle of discussing their sexual fantasies or taking a dare. A Caucasian, Luke, then admits that he wants to make love to a mutant if he was one. The third guy, Zeeshan, says that being a mutant isn't exactly cool, considering how Cyclop's mutation accidentally killed his family. But just as he desired to take a dare, his skin starts melting, causing a Light to be detected on Cerebra. As the Lights rush to his rescue, Zeeshan grabs a knife and locks himself in the bathroom. The Lights arrive too late, as he had committed suicide. Kitty Pryde then comes down the ramp of the Blackbird and shows Luke the post he made of his friend's face. Hope gets angry and declares that they have to be better.

Four weeks later, Zero attempts to murder Luke in his sleep, only for Wolverine to stop him. He advises Zero to show mercy and leave Luke to live with his guilt. Wolverine then takes Zero out for a drink.

This is the X-Men comic that will have people talking for years! Some candles burn twice as bright and half as long. Some candles don't get a chance to burn at all. Generation Hope discover what happens when a light goes out.

Retrieved from "https://heykidscomics.fandom.com/wiki/Generation_Hope_Vol_1_9?oldid=1430772"
Community content is available under CC-BY-SA unless otherwise noted.