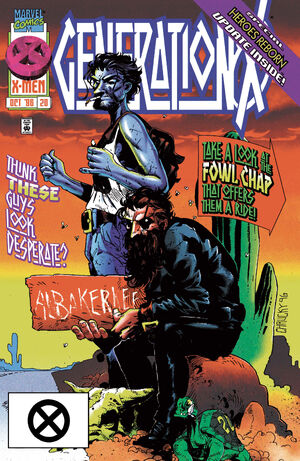 My salad...did you see it? It attacked me!

Appearing in "Bodies in Motion"Edit

Synopsis for "Bodies in Motion"Edit

From within the confines of Bastion Hollow, Bastion instructs his assistant, Daria, to scan surveillance footage from Logan International Airport. They discover evidence of the mutants known as Chamber and Empath. Bastion orders her to obtain as much information as possible concerning Chamber.

Back at the school, the members of Generation X are enjoying a barbeque out near the Bio-Sphere. Artie and Leech are playing near the waterfall while Jubilee horses around with Synch. Emma is attempting to enjoy a salad when she suddenly experiences a waking vision. The dream-realm entity known as Nightmare appears before her eyes and briefly taunts her, before disappearing altogether. Mondo comes over to console Emma, but she doesn't tell him about the psychic vision.

As day grows into evening, the Xavier Institute receives a strange visitor. Nathaniel Richards, has brought his grandson Franklin to stay with Generation X. He explains to Banshee that Franklin's parents were killed during the recent battle with Onslaught, and he felt that the school would be the best place for him. Despite a brief altercation between the two, Banshee pledges to do whatever he can for Franklin.

Franklin joins with Artie and Leech and they race off back to the tree house. When they arrive, they find a strange alien woman laying in the shadows of the trees. She beckons the children to aid her.

Meanwhile in California, Chamber and Skin continue to hitchhike down the highway. After several cars fly pass them, one of the vehicles stops to offer the two mutants a ride. The driver of the vehicle is none other than Howard the Duck.

Retrieved from "https://heykidscomics.fandom.com/wiki/Generation_X_Vol_1_20?oldid=1531907"
Community content is available under CC-BY-SA unless otherwise noted.