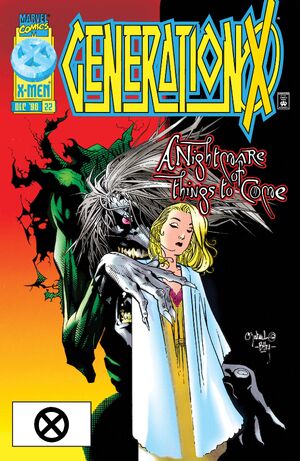 It was rather satisfying to see the expressions on their dirty little faces.

Appearing in "All Hallows Eve"Edit

Synopsis for "All Hallows Eve"Edit

Banshee and Paige take Artie, Leech and Franklin to Rutland, Vermont to celebrate Halloween. Banshee is satisfied by the fact that Artie and Leech can enjoy trick-or-treating without worrying about their physical mutations. He grows concerned however for young Franklin, who is spending his first Halloween without his family. Franklin misses his parents – Mister Fantastic and the Invisible Woman, who heroically sacrificed their lives to stop the threat of Onslaught. Paige tends to Franklin's depression and tells him that she lost her own father when she was very young.

Back at Xavier's School for Gifted Youngsters, a group of troublemakers in a 4x4 truck drive up to the school campus hoping to start some trouble. Suddenly, their truck begins to rise up in the air, and as they stare out the windshield, they see a glowing spectral skeleton and a hanged man writing from a tree branch. The troublemakers, scared beyond reason, quickly take their leave. The perpetrators of the "ghostly" effects are actually M, Jubilee, Chamber and Skin. They take great delight in using their powers to enhance the Halloween experience.

Meanwhile, Emma Frost suffers her own horrific visitation. The entity known as Nightmare appears before her on the balcony outside of her room. He tells Emma that he actually requires her assistance in exorcizing a powerful psychic entity from the land of dreams. Emma quickly realizes that Nightmare is lying and demands to know what he truly wants. Nightmare concedes that he is still the master of the dream world, but the threat to his domain is in fact real. He wants to certify that this mysterious foe cannot enter the Dream World by way of Emma's psychic powers. Emma tells him that she cannot transport physical matter through the psychic realm. Satisfied, Nightmare prepares to take his leave.

Before returning to his native realm however, Nightmare leaves Emma a parting gift – a nightmare vision of the future, in which she sees all of her dreams crumbling to the ground. This is Nightmare's way of saying "Thank you".

Retrieved from "https://heykidscomics.fandom.com/wiki/Generation_X_Vol_1_22?oldid=1549344"
Community content is available under CC-BY-SA unless otherwise noted.