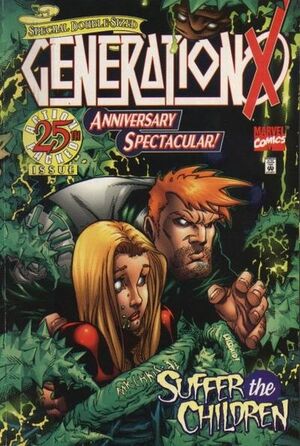 T'me, this has always been the fun part. Sure, there's the thrill o' battle...the chase, the blood...but there's nothing quite as excitin' as the thrill a body gets from terrorizin' wee ones and women. And now...ducks.

Mondo betrays Generation X. He has been secretly working for Black Tom Cassidy, analyzing the team's weaknesses and allowing Black Tom the opportunity to take them all down in one fell swoop. Black Tom attacks the Xavier School and begins brutalizing Sean Cassidy with his new elemental plantlike powers. He wants revenge upon Sean for taking his niece, Theresa, away from him. He believes that the surest way to satisfy his goals is by slaughtering Sean's current charges, the students and warns at the school.

Meanwhile, Jubilee has temporarily escaped Black Tom's fury and races out into the woods. However, she finds herself standing face to face with an even larger threat – Bastion. Mondo comes up behind her, but Bastion dispatches him with a power blast and abducts Jubilee.

In the Bio-Sphere, Howard the Duck tries to find a way to get the children to safety. Black Tom raids the tree house and prepares to kill them. Howard drives Black Tom back by setting him on fire with the lit end of his cigar. As the tree house erupts into flames, Howard, Artie, Franklin, Leech and Tana Nile discover that the Man-Thing is present on the estate. Recognizing that the Man-Thing is the gateway into the dimensional rift known as the Nexus of All Realities, Howard convinces the others to dive into the creature's slimy body in the hopes of escaping. Their plan appears to work and they disappear inside the Man-Thing’s mass.

Black Tom heals himself from the burns and returns to tormenting Sean. He takes control of Emma's body and forces her to attack Sean. Tom tells him that he will let the kids live if Sean agrees to murder Emma. Sean refuses, but Emma takes control of Sean’s mind and forces him to turn his sonic cry upon her before she can do any more damage.

While Black Tom gloats in his supposed victory, Penance comes up from behind him and cleaves him down the middle with her razor sharp claws. Black Tom’s essence slips away and his temporary vegetative form collapses.

Sean discovers that the remaining Generation X kids found on the premises are actually but false empty shells created by Black Tom. The real students are trapped inside of a bio-prison in the middle of the sea.

Retrieved from "https://heykidscomics.fandom.com/wiki/Generation_X_Vol_1_25?oldid=1515720"
Community content is available under CC-BY-SA unless otherwise noted.