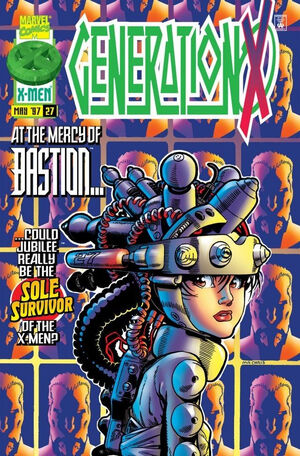 Before I became a mutant -- before I learned I was a mutant -- I never even knew there was a difference between human and mutant! I thought the idea of somebody hating somebody else for NO GOOD REASON was stupid! Is this all ya can DO, Bastion -- is this what the BIG FIGHT is ABOUT? Humans 'right' to PUNISH -- to TORTURE - TO HATE?! Is that what you're fighting for?! If it is...ya can keep yer stinkin' 'humanity'!

Appearing in "The Last X-Man"Edit

Synopsis for "The Last X-Man"Edit

Retrieved from "https://heykidscomics.fandom.com/wiki/Generation_X_Vol_1_27?oldid=1518219"
Community content is available under CC-BY-SA unless otherwise noted.