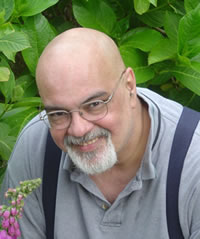 George Pérez is a Puerto Rican-American illustrator and writer of comic books. Along with John Byrne, he was arguably the most popular and influential artist in American comic books in the 1980s. He primarily illustrates superhero comics, mainly published by DC Comics and Marvel Comics, and is known for his clean, dynamic, yet ornate style, with a strong emphasis on group superhero action scenes. Pérez's family moved from Puerto Rico in the 1940s. Like many of the immigrants from Puerto Rico, they were poor and settled in the Bronx, where there was and is a large Puerto Rican community (barrio). Pérez's parents became factory workers. Eventually, they moved to Flushing, Queens, New York. Pérez often visited a comic book store called "Mike's Comic Hut" there. He became fascinated with comic books and their illustrations.

Pérez's early work included Sons of the Tiger (a serialized action-adventure strip published in Marvel's long-running Deadly Hands of Kung Fu magazine and authored by prolific comics writer Bill Mantlo). He and Mantlo co-created the White Tiger, a character that soon appeared in Marvel's color comics, most notably, the Spider-Man titles. Pérez came to prominence when he started illustrating The Avengers for Marvel Comics, starting with vol. 1 #141. His early style seemed very much influenced by Jack Kirby, one of Marvel's leading creators from the 1960s, albeit with more realistic anatomy and a penchant for making his worlds seem bright and beautiful. In the 1970s, Pérez illustrated several other Marvel books, including Fantastic Four, where he began working with Marv Wolfman.

Pérez soon moved over to work for DC Comics. Following a popular stint on Justice League of America, Pérez's career took off with the launch of The New Teen Titans, written by Wolfman. This incarnation of the Teen Titans was intended to be DC's answer to Marvel's increasingly-popular X-Men comic, and Wolfman and Pérez indeed struck gold. Moreover, Pérez's facility with layouts, details, and faces improved enormously during his four years on the book, making him one of the most popular artists in comics.

Wolfman and Pérez followed this with DC's 50th-anniversary event, Crisis on Infinite Earths, which purportedly featured every single character DC owned in a story which radically restructured the DC universe's continuity. Pérez was inked on the book by two of the best inkers in comics at the time: Dick Giordano and Jerry Ordway. After Crisis, Perez inked the final issue of Superman (issue #423) in September 1986.

Following Crisis, Pérez was responsible for relaunching Wonder Woman, tying her more closely to the Greek gods and jettisoning many of the extraneous elements of her history. Pérez at first worked with Len Wein on the stories, but eventually took over the full scripting chores. While not as popular as either Titans or Crisis, the book was a very successful relaunch of one of DC's flagship characters, and many fans agree that his run on Wonder Woman is one of the finest moments in his career, a stint that would last 5 years from 1987-1992.

Pérez returned as co-plotter/penciller with the New Teen Titans with issue #50 (Dec. 1988), the series again being renamed, this time to The New Titans, as the characters were no longer teenagers. Issue #50 tells a new origin story for Wonder Girl, her link to Wonder Woman having been severed due to retcons in Crisis on Infinite Earths. Pérez remained as penciller with the book through to issue #55, 57 and 60, while only providing layouts for issues 58-59, and 61, with artist Tom Grummett finishing pencils and Bob McLeod as inker (Pérez plotted issue #56 only, as well as providing cover art). Perez remained as inker for the cover art to issues 62-67 (and co-plotting the stories for 66-67). He would return to for the series final issue with #130 (Feb. 1996) providing cover art.

From 1989-1990, Pérez had a stint working on Superman, writing and pencilling Action Comics (and providing cover art for every issue he worked on). Pérez had first worked on the second annual issue of Action Comics (published in 1989) before taking over that title when it was brought back as a regular monthly series with issue #643 (July 1989). His work duties on Action Comics would change from writer/penciller, to co-writer/breakdowns, and towards the end restricted to providing breakdowns, with writer Roger Stern scripting stories. Artists Brett Breeding and Kerry Gammill provided finishing art from Pérez' breakdowns (Issue #646 was the only issue during his run where he was not involved with interior work of any sort, except for doing the cover art). Pérez managed to provide pencils & inks for an 8-page sequence for issue #650 (Feb. 1990). Pérez also had a short stint working on another Superman title, writing Adventures of Superman, providing plots for issues #457-459 (Aug. 1989-Oct. 1989), and inks for issue #461 (Dec. 1989). Due to an already heavy workload while doing both Wonder Woman and Superman at the same time, Pérez left Action Comics with issue #652 (April 1990) being his last.

Unfortunately it was during this run that Pérez hit a snag working with DC Comics. He stated that he had some trouble writing the War of the Gods storyline that ran through the Wonder Wonder comic and crossed over into others since the beginning of its inception, mostly due to editorial problems. Pérez felt that DC Comics wasn't doing enough to celebrate the character's 50 year milestone anniversary. To make matters worse, DC Comics didn't place the comic for newstand distribution which meant that the only place the comic book could be bought was at retail stores that specifically specialized in comic books. George Pérez had also built-up the story plot to marry the characters Steve Trevor and Etta Candy in the final issue. When he discovered that DC editors had decided to not only pass the Wonder Woman title's writing to William Messner-Loebs but also have him write the final wedding scene, George Pérez quit the title and separated himself from the DC Comics company for several years.

In the 1990s, Pérez left the spotlight, although he worked on several popular projects, most notably Sachs and Violens and Hulk: Future Imperfect, both written by Peter David. Pérez first returned to DC Comics in fall 1996, returning to another incarnation of the Teen Titans. Teen Titans (vol. 2) was written and penciled by Dan Jurgens, with Pérez as inker for the first 15 issues (of its twenty four-issue run). The series debuted in October 1996, and ended in September 1998. Jurgens' run was unpopular with readers due to the use of new characters that had no ties with previous incarnations of the team. Pérez finally returned to a major ongoing title for the third series of The Avengers, written by Kurt Busiek, where he remained for nearly three years, again receiving critical and fan acclaim for his polished and dynamic art. After leaving the book, he and Busiek worked to produce the long-awaited JLA/Avengers inter-company crossover, which saw print in late 2003. This provided closure for Pérez, since a JLA/Avengers crossover was originally supposed to be published in the 1980's, but differences between DC and Marvel forced the comic to be canceled.

Perez has one creator-owned comic, the unfinished Crimson Plague. A science fiction story about an alien with ultra-toxic blood, the first (and for years, only) issue was published in the late Nineties by the now defunct Event Comics. In 2000, the original first issue was published by Image Comics (under the Gorilla imprint) with additional material and pages, with a follow up issue published soon after. It is unknown if Perez intends to do anything else with the comic.

Also in the late Nineties, Perez provided artwork for various titles for CrossGen. Although he provided covers, pin-ups and pencils for various titles, his main project was penciling the interiors for Solus. Although intended to be an ongoing series, it only lasted for eight issues before it was canceled due to CrossGen's bankruptcy.

He was involved with various writing and drawing projects related to DC's Infinite Crisis and DC's The Brave and the Bold (2006), as well as working with Marv Wolfman on a direct-to-DVD movie adaptation of the "Judas Contract" story arc from Teen Titans. He is also currently co-chairman of the board of comic industry charity A Commitment To Our Roots.