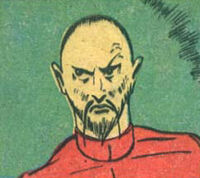 Ghor was a shady individual who was supplying many people in Chinatown with narcotics that were slowly killing them. His activities were found out by Fu Chang who stopped him from forcing the drugs on his beloved Tay Ming. Ghor was later killed in an explosion.

Retrieved from "https://heykidscomics.fandom.com/wiki/Ghor_(Earth-MLJ)?oldid=1565957"
Community content is available under CC-BY-SA unless otherwise noted.