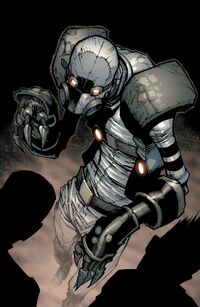 I hate this corporatist government world we live in.

The man who would be known as The Ghost was once a very promising data engineer for a major computer corporation, and the brainchild behind GhostTech, a new series of computer chips that phased into an intangible state before overheating, yet could still function in this state and hold an incredible amount of data. The prized employee of this company, its executives used his genius to make themselves exceptionally wealthy, spurring his continued productivity with everything from sports tickets to sexual favours from another employee. When the GhostTech project was finally completed, they had his lover killed after she threatened to reveal how the company made her into a call girl for their benefit, causing him to slid into a deep depression. As a result, he eventually infused his body with GhostTech and formed a cyberpathic connection with the company's systems in order to become more productive and escape the traumas of the real world, discovering the woman's murder in the process. Surviving an assassination attempt thanks to the GhostTech in his body, he dispatched the company executives one by one, before eliminating any link to his past life and becoming a full-time corporate saboteur. It should be noted that this origin may be inaccurate, given that Ghost was telling it to the untrustworthy Moonstone, and that his prolonged existence within an intangible state has negatively affected his psyche, including perhaps his memories.

The Ghost was initially hired by Carrington Pax, a leading executive of Roxxon Oil, to destroy Accutech Research and Development. Accutech was trying to develop a beta particle generator and when they refused to sell it to Roxxon, the Ghost was hired to drive Accutech into bankruptcy. Anthony Stark, head of Stark International, was interested in acquiring Accutech's technology and bought the company. Investigating a disturbance at the new facility as Iron Man, he first encountered the Ghost. Iron Man managed to drive the Ghost from Accutech, but the Ghost swore that he would have his revenge on Tony Stark and his company.

For the next few weeks, Tony Stark spent all his free time modifying his armor. Sometimes, for extra security, he would sleep in his armor, too. When Pax and the other executives at Roxxon heard that the Ghost had gone rogue, they feared his actions would make the company look bad, so they called in Spymaster to take care of him, and the Ghost succeeded in killing him. Using a modified version of his intangibility circuits, the Ghost made Spymaster materialize while phasing mid-way through wall.

Stark finally took the offensive against the Ghost and set a trap that the Ghost walked right into. After a battle between Iron Man and the Ghost, Iron Man cornered him in with the beta particle generator. He had it turned on so he could see the hidden Ghost better, since radiation from the generator would cause interference in the Ghost's sophisticated stealth suit. As he tried to reach the generator to destroy it, the intense heat from his overloading costume caused the floor to melt and the Ghost fell through. As Iron Man searched for him, all he found of the Ghost was his burnt costume.

The ghost reappeared sometime later in Italy, this time under the employ of Justin Hammer. The shrewd industrialist intended to sell a company, Electronica Fabbrizi, to Tony Stark, ridding him of a useless asset, as well as sticking a business rival with a nasty problem. However, after Tony Stark discovered the true ownership of the floundering company, a compromise was reached: Hammer's forces and Iron Man would cooperate in taking out the Ghost.

Ghost attempted to kill Iron Man by rendering him intangible. While Iron Man managed to save the lives of everybody involved, Electronica Fabbrizi was irrevocably destroyed and the Ghost escaped. However, when the mysterious villain confronted Hammer, it was revealed the ruthless business man had defenses developed against the Ghost's intangibility powers, and made his own escape, leaving his assailant trapped. Blasting his way out, the saboteur vowed to continue his crusade against Hammer and all companies anywhere.

Ghost was next hired by the Kingpin to steal the new Roxxon process to create synthetic vibranium, and battled Spider-Man and the Black Panther in the process.

Much later, several companies were suddenly and violently destroyed when bombs, apparently installed in personal computers, went off in inner-city offices. Tony Stark, who at the time was undercover as a common employee at one of the companies that went under, managed to track down the source of the attacks: the "Advanced Corp", a cover for A.I.M. It was then revealed that A.I.M, not usually operating in common business circles, on this occasion had employed a special agent to eliminate the competition: the Ghost. Nearly defeating Iron Man in their first fight and escaping without a hitch, he hit a nasty snag during their second fight when he attempted to phase his costumed hand into Iron Man's chest, and Tony Stark's then-artificial heart defended itself, knocking him unconscious. He was subsequently arrested, but his identity appears to have remained unknown.

Having apparently escaped, the Ghost (In a new, more streamlined outfit) was employed by the third Spymaster to help free the Living Laser, who was "held captive" by Stark International at the time. He attempted to kill Iron Man, and believed to have succeeded after destroying a decoy. In the end, he proved too unreliable and quirky, and was abandoned by his employer.

Sometime during the Dark Reign Story Arc Ghost is recruited by Norman Osborn into the Thunderbolts. He has become more and more reclusive and never takes off his suit.

When Natasha Romanova (Black Widow) posed as Yelena Belova (Black Widow II) was captured along with former Thunderbolt member Songbird, Ghost, Headsman and Paladin went against orders of killing the two. They helped them escape custody and Ghost erased the memories of Mister X and Scourge in order to keep their place on the team. Ghost usually had his own agenda and didn't really care about the Thunderbolts, being more interested in studying advanced technology. For Ghost, Norman Osborn represented everything wrong with modern American society; a fusion of military, corporate and political power, and was taking part in the Thunderbolts so as to sabotage his efforts from within.[2]

Because Tony Stark had purposely lobotomized himself into a vegetative state, and had his power of attorney transferred over to Donald Blake, Madame Masquehired Ghost to kill Stark. She provided him a phone made by the Tinkerer, which he could use to execute his phase abilities to reach any place in the world. Ghost managed to track Stark to Broxton, Oklahoma, where he twice attempted to assassinate Stark. All the while, Stark's comrades were attempting to reboot his brain. By then, Stark had regained consciousness and used the Ghost's own phone against him, sending him to a facility in Seoul.

The Ghost has recently become a member of the Thunderbolts team under the leadership of Luke Cage. He has participated in missions alongside his new teammates Juggernaut, Crossbones, Moonstone, Mach V, Luke Cage and Man-Thing. They operate out of the Raft and are also imprisoned there. While on a mission hunting troll, one troll (who was an A sgardian with a troll father) with an ax cut his suit while he was intangible and he is shocked that it happened. When the A vengers Academy students came to the raft for scared straight Ghost was talking to them how they have pills in the food and that Pym shrinks down to control them. Then when Luke Cage sent the team down into a cavern he said he detects 38 life forms and the team thinks he's talking about the rats but when Fixer turned on the lights Ghost says he wasn't talking about the rats and there were ninjas who attacked them. When they beat the ninjas Songbird took Fixer to a hospital and Moonstone, Juggernaut Crossbones and Ghost stayed down and looked for the underground ninja palace. Juggernanut and Moonstone stayed outside to face the ninjas while Ghost and Crossbones went in to look for the prisoners. Ghost took the direct route but couldn't phase Crossbones so he had to go the hard way and fight ninjas. Ghost went to the top, gave weapons to the prisoners and freed them when a ninja saw Ghost stayed intangible to keep him distracted while the prisoners got out and and kill the ninja.

During Ghost's time with the current Thunderbolts, one mission pulled Ghost, Juggernaut and Crossbones aside with visitors Iron Man and Captain America. While Juggernaut tried to escape and Crossbones tries to kill Captain America, Ghost starts a fight with Iron Man, only for Stark to reveal the current state of his business to Ghost: that Stark Enterprises is now a small, independent business and not the sort of "evil corporation" that Ghost is dedicated to destroying. Due to this development, Ghost has, for the time being, sworn off his grudge against Tony Stark.

After the Thunderbolts get grounded for Crossbones' killing of Darris Kimbro, Ghost and Moonstone are the only ones left on Thunderbolts Tower. In an act to attempt to lighten the mood, Moonstone warms up to Ghost by asking him what his origin is. Ghost agrees to her request and tells her his life's story. After telling his story, Ghost leaves Moonstone speechless.

On a new mission that involves stopping monsters from entering Japan, the Thunderbolts add Hyperion to their ranks. Ghost and his fellow Thunderbolts head to Japan via Man-Thing. Ghost, who can't really do much in this mission is left to observe. Hyperion goes ballistic and drowns Moonstone and Songbird. Juggernaut resurfaces the two, and Ghost gives them mouth-to-mouth resuscitation. Ghost with fellow Thunderbolts, Juggernaut and Moonstone, beat up Hyperion, with Man-Thing delivering the finishing touches.

Retrieved from "https://heykidscomics.fandom.com/wiki/Ghost_(Earth-616)?oldid=1733289"
Community content is available under CC-BY-SA unless otherwise noted.