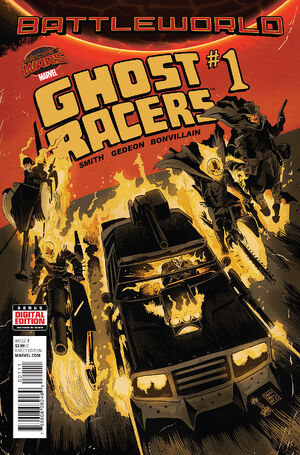 You're good, Robbie Reyes. Too good for your own good... and especially good for me. So good, in fact, that you're gonna make this rich man... even richer... when you never see the finish line again.

FURIOUS RACE FROM HELL IN A BLAZING ARENA OF HORROR!!!

• Welcome to the scorching-hot track where cursed souls race at the speed of sin, anything and everything goes and the only rule is no rule--it’s the spectacle known as the GHOST RACES; the most hellish “entertainment” known to BATTLEWORLD!

• 1st place prize: Temporary freedom from the ARENA, but what happens to the unlucky and unholy losers?

• It’s all-out, high-speed warfare among the most bizarre and vicious GHOST RIDERS of the MARVEL UNIVERSE. Expect MANY familiar SKULLS!!

Retrieved from "https://heykidscomics.fandom.com/wiki/Ghost_Racers_Vol_1_1?oldid=1447432"
Community content is available under CC-BY-SA unless otherwise noted.