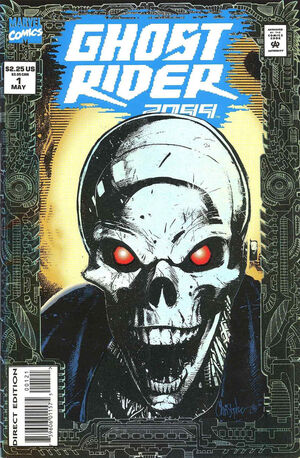 A bad attitude -- with your name on it.

A infothief named Zero is being chased by the Artificial Kidz, who were hired to take back a specific file that was stolen. Before they catch him though, Zero sends his consciousness into cyberspace, where he is saved by the Ghost Works, who want him to be their agent. He agrees and they create a new cybernetic body for him dubbed "Ghost Rider", and his first mission - vengeance.

Retrieved from "https://heykidscomics.fandom.com/wiki/Ghost_Rider_2099_Vol_1_1?oldid=1430700"
Community content is available under CC-BY-SA unless otherwise noted.