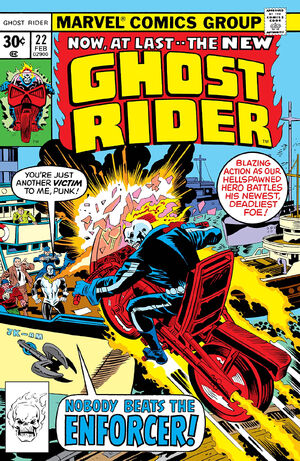 Appearing in "Nobody Beats the Enforcer!"Edit

Synopsis for "Nobody Beats the Enforcer!"Edit

Once again speeding away from the police, Ghost Rider makes an escape from the LAPD and returns to his guise of Johnny Blaze and pays a visit to Karen Page to try and talk her into pursuing a serious relationship with him.

While elsewhere, the criminal Enforcer meets with Professor Goldman to have the disintegration device they stole from the Eel to be miniaturized. The miniaturization is a success and the Enforcer uses it to take control of the LA crime scene. While at the estate of "Coot" Collier, Coot's son, Carson Jr. comes to visit.

While Johnny continues to perform on the Stuntmaster show he's asked to see Mr. Delazny, who is waiting in his office with officer Flannigan of the LAPD. Flannigan wants to take Johnny downtown to talk about all the panic he causes around town when he rides around as the Ghost Rider. Refusing, Johnny makes a run for it and manages to escape the police.
Checking in with Roxanne, Rox tells Johnny that the Eel was hired directly from Mr. Delazny's office. Checking out Delazny's mansion as the Ghost Rider spots the Enforcer and his men exit the mansion in a limo. Following it to the military ship yards, Ghost Rider watches as the Enforcer uses his disintegration ring on naval ships as a message to those who may try to stop him. Ghost Rider attacks him and during the fight both are knocked into the water. In the struggle the Enforcers ring is dropped in the ocean and lost, then the Enforcer escapes. The next morning when the police are waiting for Johnny to show up for work, they are about to take him in when "Ghost Rider" rides by. The police having nothing else to go by, decide to leave, little knowing that Johnny had made a false Ghost Rider out of hell-fire.

Retrieved from "https://heykidscomics.fandom.com/wiki/Ghost_Rider_Vol_2_22?oldid=1426723"
Community content is available under CC-BY-SA unless otherwise noted.