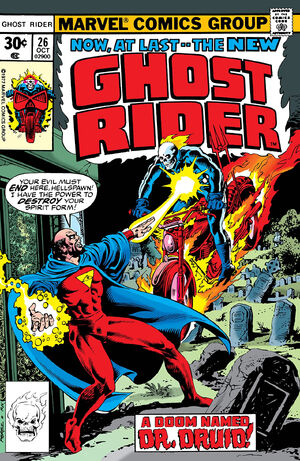 Learning that Roxanne is having a romance with Roger Cross, Johnny goes mad and vents his anger as Ghost Rider, catching the attention of Dr. Druid.

Druid books an appointment with Charles Delazny, and uses his hypnotic power to make him stay until Johnny arrives. When Johnny is attacked by Druid he transforms into Ghost Rider and the two engage in a fight across the Delazny studio. Ghost Rider has the upper hand until Druid can use the amulet of Tiboro to force Johnny to change back to human form.

Dr. Druid then easily beats Johnny in a fight, knocking him out, however probing Johnny's mind he learns that although Johnny's powers spawn from Satan, he is not an evil man and so he leaves. When Johnny revives he leaves LA without telling anybody, upsetting Roxanne.

Retrieved from "https://heykidscomics.fandom.com/wiki/Ghost_Rider_Vol_2_26?oldid=1426727"
Community content is available under CC-BY-SA unless otherwise noted.