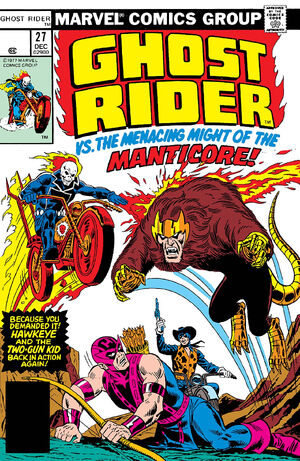 Appearing in "At the Mercy of the Manticore!"Edit

Synopsis for "At the Mercy of the Manticore!"Edit

While traveling the Arizona desert reflecting on the events that led to him leaving LA, the Ghost Rider participates in a friendly motorcycle race with a fellow biker which leads to him noticing bike troubles, prompting him to pull into a town for repairs.

That night, Hawkeye is attacked by the Manticore, a cybernetic being hired by the Brand corporation to kill one of the Avengers as a message to Hellcat to return the suit she stole from them. Johnny is told about the Manticore's attack by Two-Gun and arrives as Ghost Rider. Ghost Rider, Two-Gun and Hawkeye then easily defeat the Manticore, Ghost Rider dismantling his armor. They come to the realization that the Manticore had no real legs, just cybernetic ones. With the villain defeated, Hawkeye realizes that he can never get away from his duties of being an Avenger.

Retrieved from "https://heykidscomics.fandom.com/wiki/Ghost_Rider_Vol_2_27?oldid=1426728"
Community content is available under CC-BY-SA unless otherwise noted.