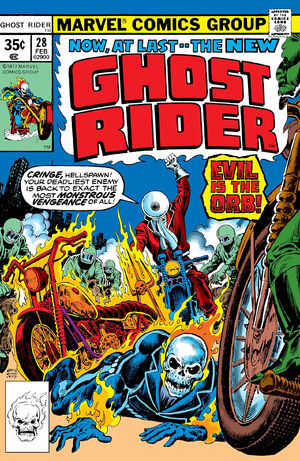 Stupid human! Will you never learn? Mine is the power of Hell unleashed!

Appearing in "Evil is the Orb!"Edit

Synopsis for "Evil is the Orb!"Edit

The Ghost Rider is driving through the Arizona desert when his Hellfire cycle suddenly disappears from beneath him. He is hurled across the asphalt and knocked unconscious. A hippie drives by, and gives the barely conscious Blaze a lift into town. From there, he finds a cycle shop and purchases a new motorcycle.

Meanwhile, Roxanne is also in town trying to track Johnny down. She runs into Brahma Bill who puts the moves on her, but Roxanne has no interest in Bill's advances. Leaving to resume her search for Johnny, Roxanne runs into the Orb. The Orb uses the power of his helmet to make Roxanne forget all about Johnny.

Later that evening, Johnny continues driving through the desert. At a loss to explain the sudden absence of his powers, he has yet to try transforming into the Ghost Rider again. Suddenly, a biker gang - under the hypnotic influence of the Orb, descends from a high bluff and attacks him, forcing Johnny to the ground. The Orb approaches, still blaming Blaze for his mutilated face. One of the bikers in the Orb's entourage is actually Brahma Bill, who infiltrated the gang under the pretense of being under the Orb's mind control. Bill distracts the other bikers long enough for Johnny to transform into Ghost Rider.

Ghost Rider and the Orb battle one another, and the two fall from a high cliff. Both men survive, but Ghost Rider manages to finish the Orb off with a large wave of Hellfire. When the smoke clears, the only thing left behind is the villain's helmet.

The following day, Brahma Bill meets up with Roxanne. Aware of her sudden amnesia, he takes advantage of the situation and convinces Roxanne she is actually his girlfriend.

Retrieved from "https://heykidscomics.fandom.com/wiki/Ghost_Rider_Vol_2_28?oldid=1552391"
Community content is available under CC-BY-SA unless otherwise noted.