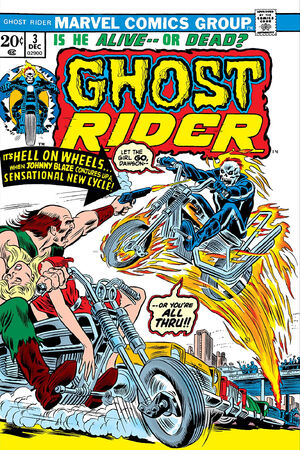 Appearing in "Wheels on Fire"Edit

Synopsis for "Wheels on Fire"Edit

Returned to the Earth dimension by the Son of Satan, Ghost Rider and Witch Woman find themselves stranded in the desert. Witch Woman shows Ghost Rider how to make a motorcycle out of hellfire, but has to stay behind as she has lost her Satanic powers. As Ghost Rider is racing off to find Roxanne, Roxy herself is once again terrorized by Big Daddy Dawson, who captures her and takes her back to his home.

Racing into town, the Ghost Rider begins to change back into John Blaze as dawn begins to break, causing his hellfire motorcycle to disappear. Blaze ends up tumbling into traffic causing an accident and is hospitalized. When Dawson reads about Blaze's hospitalization, he believes that he can ransom Roxanne. However, when Dawson arrives at the hospital, it is nightfall and Johnny has once more turned into Ghost Rider. Able to disarm Dawson of his gun, the two then duel on motorcycles, ending with Ghost Rider bringing Dawson to the point of fear. Fleeing Dawson crashes into a fuel truck and is seemingly killed in the explosion.

Retrieved from "https://heykidscomics.fandom.com/wiki/Ghost_Rider_Vol_2_3?oldid=1426704"
Community content is available under CC-BY-SA unless otherwise noted.