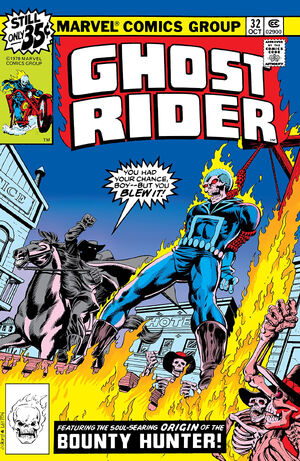 Taking Ghost Rider to a ghost town, the Bounty Hunter explains that he was contracted to retrieve John Blaze's soul. After keeping back hordes of hell as his time runs out, the Bounty Hunter tells how he came to be in this state:
He explains that he was once an unethical bounty hunter in the wild west known as Lamuel Haskill, who's habit of shooting an opponent in the back came back to him when he was shot and killed from behind by the brother of one of his last bounties. He then made a deal with the devil to become his own personal bounty hunter when needed.

However before Haskill can kill Ghost Rider, his time runs out and Demonic Cowboys arrive and take him away, even though Johnny tries to stop them, they manage to overpower him and leave with Haskill as their prisoner.

Retrieved from "https://heykidscomics.fandom.com/wiki/Ghost_Rider_Vol_2_32?oldid=1426733"
Community content is available under CC-BY-SA unless otherwise noted.