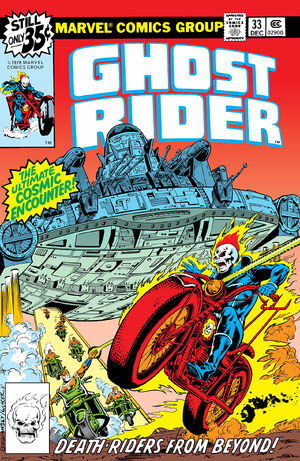 Appearing in "Whom a Child Would Destroy!"Edit

Synopsis for "Whom a Child Would Destroy!"Edit

Lost in the desert, Johnny comes across Woody Gunthers, a old prospector with psychic powers, after a brief scuffle when Gunthers believes him to be the "Dark Riders", Johnny is invited into Woody's shack for a meal. There Woody explains he stole his powers from somewhere and they've helped him mine for gold.

Suddenly there is a rumble from outside and both men go outside to check it and find a giant space shuttle is landing. From within comes the Dark Riders: robots on motorcycles. The robots attack Johnny (who turns into Ghost Rider) and Woody, but the two are able to defend themselves at first.

When Woody is knocked out and taken aboard the ship, Ghost Rider chases after and is soon captured himself. When he comes around, Johnny is shocked to find that he's a prisoner along with Woody, and another man, and that their keeper is a boy in a sphere.

Retrieved from "https://heykidscomics.fandom.com/wiki/Ghost_Rider_Vol_2_33?oldid=1426734"
Community content is available under CC-BY-SA unless otherwise noted.