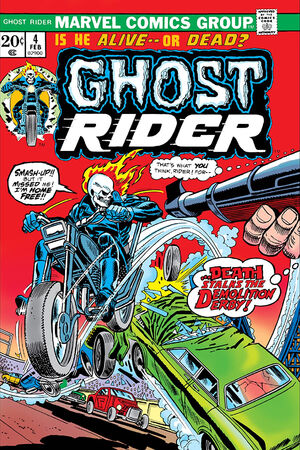 Chased by police, the Ghost Rider races into the desert to hide until daytime, when he changes back to the injured Johnny Blaze, and turns himself in to the police. Roxanne appeals to the Attorney General in Carson City, who tells her that Johnny can get an appeal if he helps out with a job in Las Vegas.

After dealing with the police, Johnny is visited by Dude Jensen who offers him to do a gig at a demolition derby, which Johnny accepts. Johnny is then visited by Roxanne and later by Linda Littletrees who has come to throw herself at Johnny. This causes Roxanne to become jealous and leave.

Later, Johnny turns into the Ghost Rider once more and rides in the demolition derby. Roxanne overhears Dude Jensen hiring a gunman to kill a derby racer named Red Thompson, an independent that's costing Jensen money. Roxanne is captured when she overhears, and fails to stop the shooter from killing Thompson. The shot causes Thompson's car to crash and almost hit the Ghost Rider. Spotting the shooter, the Rider chases after him, while in Jensen's office, Dude is about to kill Roxanne.

Retrieved from "https://heykidscomics.fandom.com/wiki/Ghost_Rider_Vol_2_4?oldid=1426705"
Community content is available under CC-BY-SA unless otherwise noted.