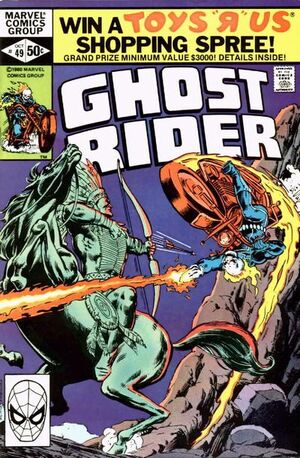 Appearing in "The Wrath of the Manitou!"Edit

Synopsis for "The Wrath of the Manitou!"Edit

After saving a dam working from an avalanche, Johnny is warned of an impending disaster that will destroy the town. This comes true when Johnny tries to foil a plot to blow up the dam and flood the village below. However, he fails to stop the bomb going off, and when he tries to warn the people of the town to seek safety, he is attacked by the Manitou spirit and then is swept away from the water. When he revives he finds himself in the past, during the Wild West.

Retrieved from "https://heykidscomics.fandom.com/wiki/Ghost_Rider_Vol_2_49?oldid=1426750"
Community content is available under CC-BY-SA unless otherwise noted.